Putin warns Macron against any ‘dangerous actions’ in Syria

TEHRAN, April 14 -Russian President Vladimir Putin has cautioned his French counterpart Emmanuel Macron against any “dangerous actions” in war-torn Syria, as the West ponders possible strikes on the Arab country in retaliation for a suspected chemical attack near Damascus last week. 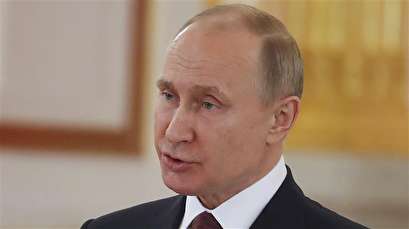 “The most important thing is to refrain from ill-considered and dangerous actions that would constitute a gross violation of the UN Charter and would have unpredictable consequences beyond conjecture,” the office of the Russian leader quoted Putin as saying during a Friday phone call with Macron over the escalating situation in Syria.

The US has been threatening Damascus with military action since April 7, when a suspected chemical attack on the Syrian town of Douma, Eastern Ghouta, reportedly killed 60 people and injured hundreds more. The Syrian government has already strongly denied using chemical munitions in the flashpoint town.

The suspected chemical attack further put Russia and the US at loggerheads and raised the possibility of direct military confrontation between the two arch foes of the Cold War era in case the Arab country is attacked by Washington. The possibility grew larger on Wednesday, after Trump warned Russia, one of Syria’s key supporters in the fight against foreign-backed militancy, to “get ready” to shoot down “nice and new and smart” American missiles over Syria soon.

However, Trump later softened his rhetoric, suggesting he was awaiting further advice and assessment before a final decision was made.

The Kremlin statement on Friday further said that President “Vladimir Putin emphasized the advisability of conducting a thorough and objective investigation, until the completion of which it is not advised to voice any accusations against anyone.”

Back on Thursday, Macron had said that he had “proof” the Syrian government had allegedly used chemical weapons on the former militant outpost of Douma and that he would announce his response “in due course.”

Moscow has repeatedly said the chemical attack was staged by desperate militants to provoke further intervention in the conflict by the West, namely the US-led military coalition that has been conducting airstrikes against what are said to be terrorists’ targets inside the Arab country since September 2014 without any authorization from the Damascus government or a UN mandate.

According to a statement by Macron’s office on Friday, he said in the phone call with Putin that “he wanted the dialogue between France and Russia to continue and intensify in order to bring peace and stability to Syria.”