TEHRAN, April 18 - Israelis have compromising material on US Republican Senator Lindsey Graham’s homosexual lifestyle which they are using to exploit him, an investigative journalist in Washington says. 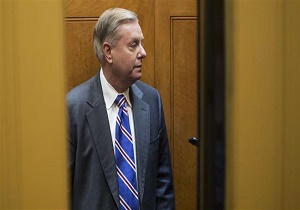 TEHRAN, Young Journalists Club (YJC) -Wayne Madsen, an author and columnist specializing in intelligence and international affairs, made the remarks in an interview with Press TV on Tuesday while commenting on Senator Graham’s statement about the recent US-led airstrikes on Syria.

The April 14 bombing by the United States, France and the UK was a “major step backwards” for President Donald Trump, Graham said on Monday, arguing that the strike failed to weaken Syrian President Bashar al-Assad and his government.

"We’re becoming the chemical weapons police, we don’t have a strategy about why Syria matters," Graham said of the attack, which saw British, French and American warships and fighter jets fire 105 missiles at Syrian government targets over an alleged chemical attack in Douma, Eastern Ghouta.

Madsen told Press TV that “Graham is a well-known neoconservative war hawk. He was hoping obviously that John Bolton, who’s his fellow traveler in neoconservative circles and the new national security adviser, that we would see a more sustained military attack against Syria.”

“What Lindsey Graham wanted to see of course was a US attack on Syrian airfields, infrastructure, the presidential palace, and on the nationals of Russia or Iran or Lebanon, and members of Hezbollah killed. That’s just fine for Lindsey Graham,” he stated.

“Lindsey Graham does not care about putting the world on the brink of World War 3. And I think the reason for that is the fact that Lindsey Graham, who comes from a very conservative state, South Carolina, the Israelis have significant blackmail information on Mr. Graham having to do with his homosexual lifestyle,” the veteran journalist revealed.

Washington says it has proof that Syrian government forces conducted a deadly chemical weapons attack on April 7, without providing any evidence.

This is while the Syrian government surrendered its chemical weapons stockpile in 2014 during a process monitored by the Organization for the Prohibition of Chemical Weapons (OPCW).

On Tuesday, Israel said it could attack what it described Iranian targets in Syria.

Share to
Related News
Trump hosts Abe with North Korea, trade on the agenda
Seven killed, 17 injured in South Carolina prison riot
Albright: Trump has undemocratic instincts, thinks he is above the law
Tags
israel ، geaham ، us
Your Comment