TEHRAN, April 24 - British Ambassador to Iran Nicholas Hopton said US withdrawal from the nuclear deal is a ‘mistake’. 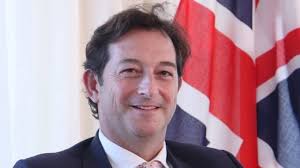 TEHRAN, Young Journalists Club (YJC) – “The nuclear agreement is the best agreement for all sides including Iran and the US,” he said.

British government's position to the issue is quite clear, he said, adding, Prime Minister Theresa May along with Foreign Minister Boris Johnson have openly said that Britain would continue to abide by the agreement successfully as long as Iran is complying with its commitments completely.

“It's a decision that governments should take. The British government's position is quite clear about this issue.”

“We have held talks with all sides and we tried to make the deal working and ensure that all sides are abiding by their commitments and Iran and international community could enjoy from benefits of the nuclear deal.”

“We have explained to our US counterparts that keeping the agreement is in line with interest of all nations. It's a very important diplomatic agreement and keeping it implementation is in favor of all sides.”

The US under President Donald Trump has repeatedly threatened to pull out of the historical agreement, which was struck between the Islamic Republic and the P5+1 group of countries, including Washington itself.

The deal removed nuclear-related sanctions against Tehran, which, in turn, changed some aspects of its nuclear energy program. All other signatories have warned the US against quitting the deal, called the Joint Comprehensive Plan of Action (JCPOA).

Trump has said unless the European parties “fix the terrible flaws” of the accord by May 12, Washington would withdraw from the deal. Iran has ruled out any renegotiation.