TEHRAN, April 30 -US Secretary of State Mike Pompeo claims that the Israeli regime has the “right to defend” itself against Palestinian protesters, as dozens of Palestinian demonstrators have so far lost their lives in the besieged Gaza Strip in recent weeks, stressing that Washington is “fully supportive” of what Tel Aviv does against the people of Palestine. 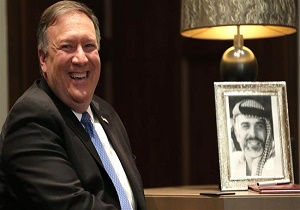 TEHRAN, Young Journalists Club (YJC) –“We do believe the Israelis have the right to defend themselves, and we’re fully supportive of that,” said the newly-appointed American top diplomat in a joint press conference with his Jordanian counterpart Ayman Safadi in capital Amman on Monday, as he wrapped up his four-day, four-nation tour through the Middle East.

Pompeo, the former CIA director who headed overseas almost immediately after he was sworn in on Thursday, even declined to make a slight criticism against the Israeli military for its use of live fire against Palestinian protesters in the blockaded sliver in the past few weeks.

Protesting rallies along the Gaza border since March 30 have led to clashes with Israeli forces in which some 50 Palestinians have so far been killed by the Israeli gunfire and hundreds of others sustained injuries.

The Palestinian rally will last until May 15, which coincides with the 70th anniversary of Nakba Day (Day of Catastrophe) on which Israel was created.

Every year on May 15, Palestinians all over the world hold rallies to commemorate Nakba Day, which also marks the anniversary of the forcible eviction of hundreds of thousands of Palestinians from their homeland by the occupying regime in 1948.

Since 1948, the Israeli regime has denied Palestinian refugees the right to return, despite UN resolutions and international law that upholds people’s right to return to their homelands.

Elsewhere in his remarks, Pompeo even refused to fully support the two-state solution for the Israeli-Palestinian conflict, the longtime policy of the White House before the US President Donald Trump’s administration.

“With respect to the two-state solution, the parties will ultimately make the decision about what the right resolution is,” he said, adding, “We’re certainly open to a two-party solution as a likely outcome. We certainly believe the Israelis and Palestinians need to have political engagement. We urge the Palestinians to return to that political dialogue.”

Pompeo’s comments came just a day after he met with the Israeli Prime Minister Benjamin Netanyahu in Israel. The American top diplomat, however, did not meet Palestinian leaders or representatives, who have cut off political contact with the Trump administration over the relocation of the US Embassy in the occupied territories.

Back in December last year, Trump announced that Washington was recognizing Jerusalem al-Quds, both its eastern and western part, as Israel's “capital.” The announcement was a major shift by Washington that overturns decades of US foreign policy. His decision was mostly aimed at pleasing his main supporters - Republican conservatives and evangelical Christian Zionists who comprise an important share of his voter base.

The highly controversial decision also infuriated Palestinians, who regards the East Jerusalem al-Quds, which hosts the third holiest Muslim site, as the capital of a future state.

Pompeo made his Middle East tour just two weeks prior the planned May 14 opening of the new US Embassy in Jerusalem al-Quds, which certainly draws massive Palestinian demonstrations.

Israel is required to withdraw from all the territories seized in the war under UN Security Council Resolution 242, adopted months after the Six-Day War, in November 1967, but the Tel Aviv regime has defied that piece of international law ever since.