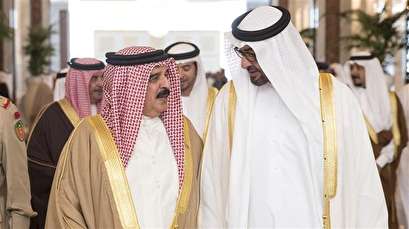 TEHRAN, Young Journalists Club (YJC) - According to a report published by the London-based pan-Arab daily newspaper al-Quds al-Arabi, Bahrain’s 68-year-old monarch is mulling over dismissing his paternal uncle, who has been the country’s prime minister since 1970, and appointing his fourth son Sheikh Nasser bin Hamad Al Khalifah in his place.

Informed sources, requesting anonymity, said King Hamad would resort to changes in the mandate of the state Covenant as a more plausible scenario to fulfill his ambitions, otherwise, he and Al Nahyan have to concoct another scheme.

The same source further noted that the dismissal of the Bahraini prime minister will undoubtedly plunge the tiny Persian Gulf kingdom into great turmoil.

Firstly, the Bahraini ruler would remove a person, whose presence in the country’s political scene has long been haunting him, and created the notion that the real administration of the country is in the hands of the prime minister.

Secondly, the Crown Prince of Abu Dhabi would get rid of a strong man, who tends to resist the absolute dominance of the United Arab Emirates on Bahrain.

It is not yet clear whether Saudi Arabia, which considers Bahrain as its backyard, would come on board and support a change in Bahrain’s political leadership, or whether it would exercise utmost caution about such a move.