Spain’s Socialists rebound in polls after taking to power 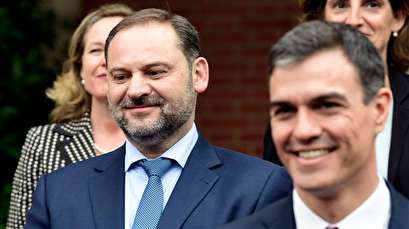 Results of a first poll by GAD3 released in the newspaper ABC on Sunday showed that the Socialists would win some 28.8 percent of the vote in the elections scheduled for 2020. The party had won 22.7 percent in the June 2016 general elections while some polls conducted before the June 1 no-confidence vote against Rajoy had shown a far lower popularity rating for the party.

Another poll by NC Report published in La Razon newspaper also said that the Socialists would trail Rajoy’s Popular Party (PP) in the next election with 24.9 percent.

The jump in approval rating for the Socialists came after its leader and current prime minister Pedro Sanchez managed to have the no-confidence vote passed in the 350-seat parliament where the his party only retain 84 seats.

Sanchez plans to stay in power through to the 2020, when the current term of the coalition government ends. He named a cabinet on Wednesday which shunned the hard-left Podemos, a party which contributed to a great a deal to Rajoy’s ouster after six years in power.

The GAD3 poll, which surveyed 800 people over phone on June 7-8, expected that Podemos would come forth in the future parliamentary elections with 13.1 percent. On top of the anti-austerity party would come Ciudadanos with 21.1 percent and PP with 25.6 percent, said the poll.

The NC poll taken on June 1-9 involving similar phone calls to 1,200 people, predicted that PP would win the elections with 25.5 percent, just ahead of the Socialists, while the market-friendly Ciudadanos which has led some recent polls, would stand at 21.0 percent followed by Podemos at 16.7 percent.

The PP won the last Spanish elections with 33.0 percent.