TEHRAN, June 17 - The United Nations says nearly 5,000 families have been displaced in Yemen’s western province of Hudaydah, whose capital port city has been under unprecedented attacks by a Saudi-led military coalition and militia loyal to the impoverished country’s former government since June 13. 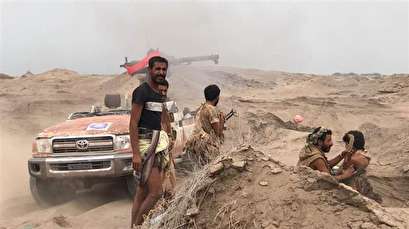 TEHRAN, Young Journalists Club (YJC) - In a statement released on Sunday, the UN Office for the Coordination of Humanitarian Affairs said 4,458 households have been displaced from their homes in Hudaydah since June 1.

It added that at least 36 displaced families had already lost their entire livelihood as their farms were damaged in airstrikes by Saudi-led coalition earlier this month.

After nearly a month of sporadic clashes between fighters of the Houthi Ansarullah movement and the Saudi-led coalition coupled with the militia loyal to Yemen’s former President Abd Rabbuh Mansur Hadi in the volatile province, the latter two launched a major assault on Wednesday to take the Houthi-held Hudaydah, a densely-populated city and the war-torn country's most vital port.

The Houthi movement, which is a significant aid to the Yemeni army in defending the country against the invading forces, has been running state affairs in the absence of an effective administration during the past three years.

The invasion of Hudaydah has already triggered fears of a fresh humanitarian crisis in a country where more than 22 million people are in need of aid, including 8.4 million who are at risk of starvation.

Meanwhile, Yemen's official Saba news agency reported that warplanes belonging to the Saudi-led coalition had conducted at least five airstrikes against Hudaydah as Hadi’s militia launched their ground attacks against the port city, a lifeline to millions of Yemenis.

“We have lived in a state of terror for three days because we are in a neighborhood close to the airport,” said resident Khaled Ateeq, 38.

According to the Ansarullah news portal, Saudi-led warplanes hit the airport with at least 20 airstrikes on Sunday.

Additionally on Sunday, Martin Griffiths, the UN envoy for Yemen, was believed to be busy pushing a truce deal between the two sides on the second day of his stay in the Yemeni capital, Sana’a. The envoy, however, did not make any statement upon his arrival at the capital’s international airport on Saturday.

Yemen’s Arabic-language al-Masirah television network reported that Houthi fighters, backed by the Yemeni army and the Popular Committees, had managed to destroy 44 military and armored vehicles of the so-called coalition and Hadi’s militia.

In a separate report, an unnamed Yemeni military source said the Yemeni army had targeted a newly-built Saudi military base in the kingdom’s southern province of Jizan with the domestically-manufactured short-range Badr-1 ballistic missile.

The report, citing the source, said that the projectile had hit the target with great precision, inflicting heavy damage upon the base.

Saudi Arabia and its allies launched the war on Yemen in March 2015 to reinstall the former Saudi-backed Hadi regime.