TEHRAN, July 17 - The European Union Foreign Affairs Council approved the amendment on the 1996 regulation in order to block in Europe the extraterritorial effects of American sanctions against European companies doing business with Iran. 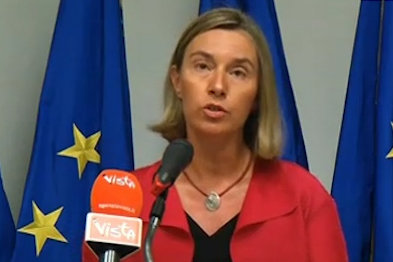 TEHRAN, Young Journalists Club (YJC) - The law bans European companies from complying with US sanctions against Iran and does not recognize any court rulings that enforce American penalties, euractiv.com reported.

The extension of the 1996 regulation to cover the US would allow stop enforcing any US court decision against companies on EU soil. It would also permit EU businesses to seek compensation to damages coming from US sanctions.

The amendment followed the recent US Administration’s rejection to exempt European companies from the punitive measures.

Germany, the United Kingdom and France, who negotiated the agreement with US, China and Russia, sent a letter to Washington requesting waivers in sectors including finance, energy and healthcare.

Following the Council meeting, EU foreign policy chief Federica Mogherini said that the update of the regulation represented a “consistent step forward” to ensure that economic benefits deriving from the Iran nuclear deal can continue being in place.

Also European Union and China also in a joint statement recalled that the Iran nuclear deal is a “key element of the global non-proliferation architecture and a significant diplomatic achievement endorsed unanimously by the UN Security Council in its Resolution 2231.”

Both sides reaffirmed their commitment to the “continued, full and effective implementation of the JCPOA,” the statement said.

The statement was released after the meeting of European Council President Donald Tusk, European Commission President Jean-Claude Juncker and Chinese Premier Li Keqiang in Beijing, the official website of Ministry of Foreign Affairs of the People’s Republic of China reported on Monday.

US President Donald Trump announced on May 8 that Washington was walking away from the nuclear agreement, officially known as the Joint Comprehensive Plan of Action (JCPOA) signed between Iran and the P5+1 group of countries in 2015.

The US president also said that he planned to reinstate US nuclear sanctions on Iran and impose "the highest level" of economic bans on the Islamic Republic.

The European bloc and China also reaffirmed their “commitment to deepening their partnership for peace, growth, reform and civilization, based on the principles of mutual respect, trust, equality and mutual benefit, by comprehensively implementing the EU-China 2020 Strategic Agenda for Cooperation”.

Also on Monday, Lebanese President Michel Aoun said the US withdrawal from the nuclear agreement would have negative consequences for Middle East stability.

“The unilateral US withdrawal from the nuclear agreement (in May) will have negative repercussions for security and stability in the region,” Aoun wrote on Twitter, his first public comment on the accord.

“Lebanon considered (the deal) a cornerstone for stability in the region,” Aoun’s office said in a statement summarizing a meeting between him and Iranian Foreign Ministry official Hossein Jaberi Ansari.

Aoun said he welcomed the commitment of other countries to continue with the deal.

European powers say they will do more to encourage their businesses to stay engaged with Iran, though a number of firms have already said they plan to pull out to avoid US penalties.