Is Trump trying to ‘change the subject’ from Helsinki fiasco to Iran? 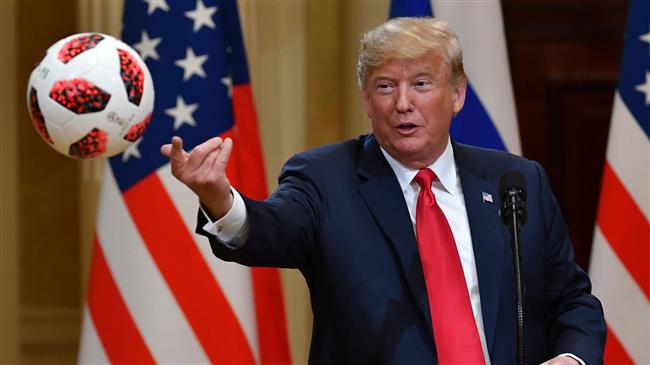 One of the questions the White House spokeswoman faced was if Trump is trying to change the American nation’s focus from his highly poor performance alongside Russian President Vladimir Putin in the Finnish capital.

“I think the president has the ability, unlike a lot of those in the media, to actually focus on more than one issue at a time,” Sanders quipped. “And certainly we know the media’s obsessed with speaking about all Russia, all the time, but the president’s focused on a lot of things that are taking place across the globe, and Iran is one of them and it’s been something we’ve talked about since we first came into this administration.”

Trump’s denial of the conclusion reached by the entire US intelligence community led to a hailstorm of harsh criticism from US politicians, both Republican and Democrats.

Some 24 hours later after bowing to Putin, Trump had to withdraw his comment by resorting to a “double negative.”

Sanders was also sent to defend the president and tell the nation that the president actually believes in the intelligence community’s assessment that Russia meddled in the 2016 presidential election, which yielded President Trump.

The harsh criticism against Trump was heightened as it was revealed that he has invited the Russian leader to Washington.

Trump’s disastrous performance has boosted speculations that Moscow might be in possession of some damaging information about the US president, a controversy known as the “pee tape.”

Moscow, however, has denied such information as well as meddling in the 2016 vote.

Trump has tried to distract the people’s attention even if it means taking a tough stance on NFL players’ kneeling during the national anthem.

The White House press secretary, however, suggested that his threats against Tehran are real.

“The president’s responding to Iran and he’s not going to allow them to continue to make threats against America. If anybody is inciting anything, look no further than to Iran,” said Sanders (pictured above).

Known for his anti-Iran sentiments from the campaign days, the New York billionaire ultimately pulled the US out of the Iran nuclear deal, backed by its allies as well as Russia and China.