May’s Brexit plan is a cheat, chuck it: Boris Johnson

TEHRAN, October 02 -Former British foreign minister Boris Johnson said that Prime Minister Theresa May is cheating the public with her plan for bringing the country out of the European Union. 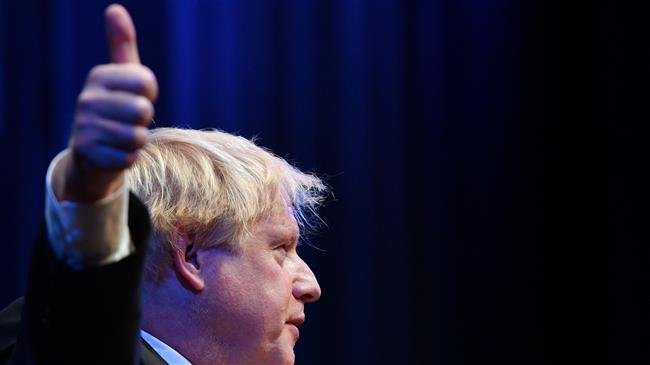 TEHRAN, Young Journalists Club (YJC) - Johnson told a fringe meeting of the  Conservative Party’s annual conference in Birmingham on Tuesday that May’s plan for a Brexit deal, known as Chequers for the place it was announced in July, was a betrayal to the British voters who decided for their country in a 2016 referendum to leave the EU.

“This is the moment to chuck Chequers,” said Johnson, adding, “If we cheat the electorate, and Chequers is a cheat, we will escalate that sense of mistrust ... If we get it wrong, if we bottle Brexit now, believe me, the people of this country will find it hard to forgive.”

Johnson has been a main critic of Chequers and even resigned from May’s cabinet when the plan was announced. The former mayor of London who was a key figure in the campaign for Brexit before the referendum, has repeatedly criticized May’s proposals for leaving the EU, saying they would make Britain a colony of Brussels when the country leaves the bloc in March.

Johnson’s Tuesday speech to the Tory conference met with cheers and applause and shouts of “bravo” from the audience in the packed 1,500-seat conference hall.

He said that May’s government was deliberately pressuring the public to accept that Chequers was the only solution available.

“Do not believe them when they say there is no other plan and no alternative,” said the conservative politician who many believe could replace May if the premier fails to go through with her Brexit strategy.

May has insisted that her Brexit plan would have the minimum economic impact on Britain if it leads to a deal with the EU. However, the plan has faced increasing criticism not only from the Tory lawmakers but also from the opposition Labour Party which has vowed to reject May’s final deal with Brussels.