Tehran, YJC. Hashemi says the time for colonialism is over and the West must start to value nations’ opinions. 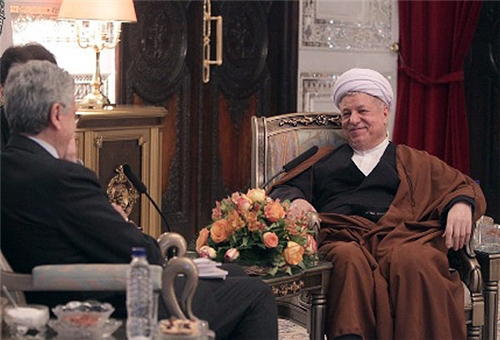 "The US government has proven perjurious by words and by deeds,” asserted Hashemi Rafsanjani, urging the West to respect nations’ opinions as the time for colonialism is over.

The Head of Iran’s Expediency Discernment Council who was speaking to the former Italian Prime Minister Massimo D'Alema in Tehran pointed to Iran’s good history in abiding by international commitments and said "Nations seeing their leaders make agreements, expect them to avoid perjury and incongruity in words and deeds, something committed by American authorities.”

Hashemi maintained that the political durability of China, Russia, the US, and EU is bound to keeping respect for other nations, asserting "The colonial times are over while nations, and even many governments such as the Islamic Republic, have woken up.”

Ayatollah Rafsanjani said that irresponsible Western behavior has created situations like Iraq, Afghanistan, Libya, and Syria and stated "Hurriedness in occupying countries and disregard to the human objectives in overthrowing dictators, as well as lack of agenda for post-occupation times have deepened people’s fear of terrorists and paved the way for extremist groups.”

He stressed that the first condition for any political talk or behavior is honesty and said "Technology and weapons do not bring power. The leaders of big countries have to accept the fact that the public will of regional nations does not stand Zionists. You can see how their lobby tries to muddy the global vibe of cooperation again.”

Massimo D'Alema in turn pointed to his overseen organization, the Foundation for European Progressive Studies, and said "Our responsibility is to enquire into the future Europe, and we know that a good perspective for Europe lies in cooperation with other countries of the world, including Iran.”

Pointing to Iran’s political achievements he said "There are many who do not like Iran’s potentials to turn into realities. But the wise of Europe are not amongst them. They rather consider themselves as Iran’s principal partner in the progress toward science and economic blossoming.”

D’Alema also provided comments on the Geneva agreement, its political results for the 5+1 countries, as well as its 6-month perspective and said "It is a pity that some governments have violated the agreements under extremist pressure. We consider the Council of Europe’s decisions yesterday as constructive so that mutual trust will lay the ground for future negotiations.”