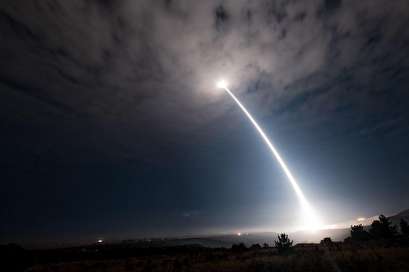 The LGM-30G Minuteman III intercontinental ballistic missile is the primary ground-based element of the U.S. nuclear arsenal. They are dispersed in hardened silos with attached underground command and control bunkers manned by Air Force officers at all times.

Each missile silo has direct communications capability with the president and secretary of defense. If those links are cut by technical failures or enemy attack, airborne command and control aircraft such as the E-6B will automatically assume command.

The original Minuteman series of missiles entered service in the early 1960s and was one of the first solid-fueled ICBMs designed. It has been upgraded several times, with the Minuteman III nearing the end of its service life.

The Minuteman III's three-stage engine gives it a range of over 6,000 miles -- its exact range is classified -- and top speed of 23 times the speed of sound. Each missile can carry up to three multiple independent reentry vehicle warheads in the 350 kiloton range, but are currently limited to one per missile by treaty.