TEHRAN, November 20 - The European Union's Foreign Policy Chief Federica Mogherini Federica Mogherini has expressed serious concern over the consequences of a decision by the administration of US President Donald Trump to quit a landmark bilateral nuclear arms control treaty with Russia. 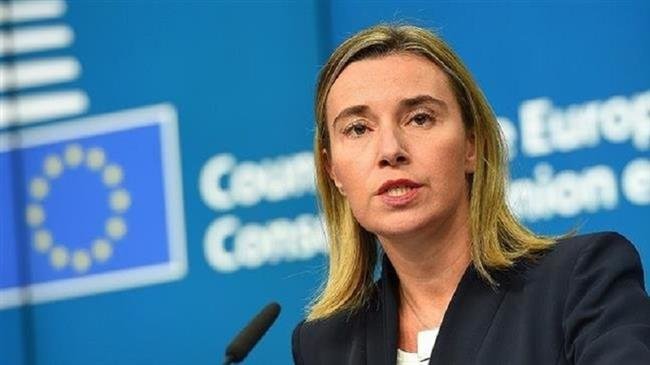 TEHRAN, Young Journalists Club (YJC) - Speaking at a summit with EU defense ministers in Brussels, Mogherini said on Tuesday that she was “extremely worried” over Trump’s decision to quit a landmark Intermediate-range Nuclear Forces (INF) treaty with Russia. She insisted European territory should not become a battlefield for other powers.

“If we go towards the dismantling of this agreement, Europe’s security is to be put at risk and we do not want to see European territory go back to being a battlefield for other powers as it has been for so long in the past,” she said.

The top European diplomat called on the signatories to the agreement to strengthen its implementation rather than dismantling it.

“We don’t want to go back to those kind of tensions, to that kind of situation and we still hope there is a space for saving the agreement and implementing it,” she said.

The Cold War-era treaty, which rid Europe of land-based nuclear missiles, has come into question against a backdrop of renewed tensions between the West and Russia.

Russian President Vladimir Putin has warned Washington against withdrawing from the INF, the decades-old agreement.

European leaders worry any collapse of the INF treaty could lead to a new, destabilizing arms race.

The treaty banned all land-based missiles with ranges of 310 to 3,420 miles and included missiles carrying both nuclear and conventional warheads. The original ban between Moscow and Washington led to the elimination of 2,692 missiles.

Trump said on October 20 that Washington would withdraw from the INF, which was signed towards the end of Cold War in 1987 by then President Ronald Reagan and Soviet leader Mikhail Gorbachev.

Gorbachev last month said that Trump’s decision to ditch the Cold War-era nuclear weapons agreement with Russia could lead to the collapse of the current non-proliferation mechanism.

The US said it is withdrawing from the pact because of Russia's alleged violation, an accusation Moscow denies. Russia said it was Washington that violated the agreement.

Experts warn that leaving the agreement could provoke a dangerous arms race across Europe, akin to the one that was unfolding during 1980, but was ended by the INF.

Trump’s decision has also drawn criticism from China and US allies, who warned against the security risks the collapse of the INF could pose to Europe.

Share to
Related News
US sanctions Russia, Iran firms for Syria oil sales
Britain slams Germany, France for proposing EU army
Spain to vote against Brexit accord if text on Gibraltar not changed: PM
Solution over Italy budget can be found with EU, but main measures to stay: Deputy PM
Tags
eu ، people ، arms
Your Comment