Turkey calls for joint cooperation with Iran, Russia on US forces’ pullout from Syria

TEHRAN, Jan 9 -Turkish Foreign Minister Mevlut Cavusoglu has called for joint control with Russia and Iran of US troops’ withdrawal from Syria, saying Washington is facing “certain difficulties” with the planned exit. 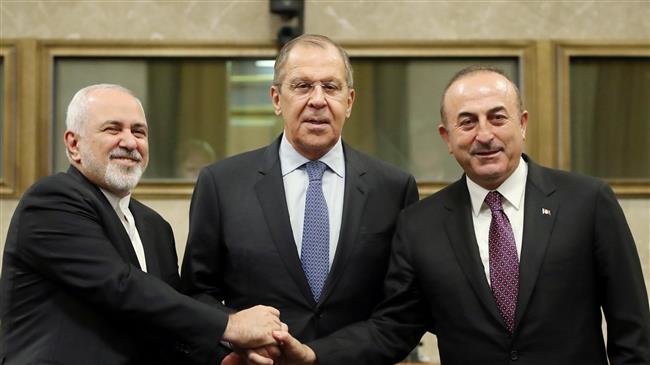 TEHRAN, Young Journalists Club (YJC) -“The United States [has] been facing certain difficulties with the process of the troops' withdrawal from Syria. We want to coordinate this process with Russia and Iran, with which we had arranged work in the framework of the Astana process,” Cavusoglu said Wednesday.

He added that the US was facing challenges as it attempted to end involvement with the Kurdish People's Protection Units (YPG) militant group because it was too engaged.

The top Turkish diplomat said the withdrawal should be coordinated with Iran and Russia to prevent terrorists from taking up the vacated regions.

“[It is needed] in order for terrorist organizations not to fill in the void [following the US pullout],” he said.

He mulled bilateral talks between Turkey and Iran but gave no framework.

He, however, said that a summit between all the three parties was being prepared in Moscow.

Iran FM: Immediate withdrawal of US troops to benefit Syrians

Meanwhile, Iranian Foreign Minister Mohammad Javad Zarif said Wednesday that the presence of American forces failed to provide security for the Arab nation. He added that an immediate withdrawal of US forces from Syria would serve the interests of the Arab country.

“They (Americans) did not provide any security for any one. We believe the sooner they leave Syria the better for the people of this country,” he told reporters on the sidelines of the Raisina Dialogue, a multilateral conference held annually in New Delhi.

US President Donald Trump announced his decision to withdraw the US troops from Syria, roughly 2,000, on December 19, 2018, citing the defeat of the Daesh terrorist group.

The US originally announced the decision to withdraw forces within 30 days. However, US officials later indicated the withdrawal could be done over the course of several months. This comes as National Security Advisor John Bolton, along with officials at the State Department and the Pentagon, has said that there is no timeline because a withdrawal is conditions-based.

The two NATO allies are at loggerheads over the Syria conflict, including the withdrawal of American forces from the Arab country.

"Despite the fact that we reached a clear agreement with Mr. Trump, different voices have been raised from different echelons of the US administration," Erdogan said during a speech on Tuesday, adding that he could soon hold another phone call with the American president.

He said that Turkey would never agree to a compromise that protected the YPG, which is considered by Ankara a terrorist group.

The YPG forms the backbone of the so-called Syrian Democratic Forces (SDF), an anti-Damascus alliance of predominantly Kurdish militants.

Bolton, before arriving in Ankara, said Washington would not leave Syria without first receiving guarantees that Turkey would not attack its allies.

The US has been arming and training Kurdish militants under the banner of helping them fight Daesh, but Syria and several other countries see ulterior motives behind the deployment.

Turkey has repeatedly questioned Washington’s deployment of heavy weapons in Syria despite the defeat of Daesh in much of the Arab country.

The US deployed troops and equipment to Syria in 2014 as part of a Washington-led coalition supposedly fighting Daesh.

Iran, Russia and Turkey act as the guarantors of an all-out ceasefire regime in Syria.

Senior diplomats from the three countries have held several rounds of consultations with the Astana format amid efforts to find a political solution to the crisis in the Arab country.

The Kazakh capital Astana has been hosting talks since January 2017 between the Syrian government and opposition, with the guarantor states in attendance as mediators.

The talks have helped significantly decrease the violence gripping Syria by creating for de-escalation zone there. They have also paved the way for the formation of a constitutional committee.

Iran and Russia have been supporting the Syrian government in its anti-terror operations at the request of the Damascus government.

Russian jets have been targeting positions held by terror outfits inside Syria since September 2015 while Iran has been offering military advisory assistance to the Syrian army.