TEHRAN, Jan 12 -Thousands of demonstrators wearing yellow vests have taken to the streets of London, in the largest protest yet in Britain copying the "yellow vest" protests rocking France since November. 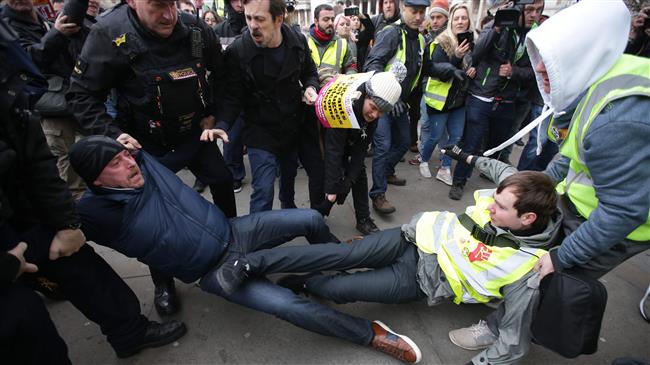 TEHRAN, Young Journalists Club (YJC) -Various media outlets in Britain reported on Saturday that most of the people donning yellow vests to march toward London’s Trafalgar Square were protesting against years of austerity measures that many say have resulted in economic hardship for millions in Britain.

A similar yellow-vest protest was held on Saturday by people demanding more clarity surrounding Britain’s withdrawal from the European Union. The pro-Brexit march attracted hundreds of people, reports said, despite the fact that a leading campaigner had been arrested by police for an alleged harassment of a lawmaker outside the parliament earlier this week.

The People's Assembly Against Austerity organized the main protest in central London and other UK cities. Anti-austerity protesters carried banners reading “Britain is Broken” during the Saturday march, according to the Evening Standard. The newspaper said on its website that trade union were handing out leaflets to the protesters while erecting stalls and large banners.

The pro-Brexit march, however, began outside St James Tube station and social media reports said the protesters were marching toward Westminster, the house of the British parliament.

The pro-Brexit march come a week after around 100 people wearing yellow vests set off smoke bombs and stopped traffic in the same area in London. Police arrested four, including a 13-year-old girl, in the demonstration which was mainly focused on a political standoff in the parliament where lawmakers are set to vote on a government deal with the EU in the upcoming days.

Many believe the yellow-vest movement in Britain could expand in size and reach proportions seen in France over the past weeks if the uncertainty surrounding Brexit is deepened after the vote in the House of Commons on January 15. A rejection of the government’s Brexit deal in the parliament could cause Britain to cancel its 2016 decision to leave the EU.