TEHRAN, YJC. Syria Deputy Foreign Minister Faisal Mighdad has said that that people will decide on Assad to remain, but his leaving office would mean the end of Syria. 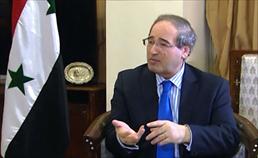 Russia Presidents "In answer to this question I must say that upon hearing such news a Syrian citizen would be panicked. They will ask themselves if Russia’s stands on our country will alter.”

As to the odds of Assad resigning from power he said "I do not know what stand Russia will adopt. But I must say that Assad’s abdication will mean the annihilation of Syria. He works day and night for the present and future of his people. Bashar Assad’s program for the future of Syria is based on the viewpoint of the nation. After the National Solidarity Talks, Asad has no problem with elections and the vote of his own people. If people chose him he will remain in the office and if they do not want him, he will leave it easily. Polls will decide Assad to stay or go.”

Faisal further said regarding Qatar to have announced that representatives from Syria oversees opposition will have a place in the Syrian Embassy building in Doha "This act is against the Geneva Convention. But so far we have not seen common stands regarding this action from Qatar. Qatar must await indications of its act and the response by Syria.”

Faisal also said that there is verified information on the cooperation of Syrian terrorist groups with Israeli officials at the crisis onset.

He said in answer to a question whether Iran is going to discuss Syria in its 5+1 talks Faisal said "I no nothing of this and I cannot give my opinion unless I have verified information.”