Dow, Total part of group that raised $1B to clean plastic in ocean

TEHRAN, Jan 23 -Some 30 companies including Dow, Total, LyondellBasell and other big makers of plastic that often ends in rivers and is carried to the ocean, have raised $1 billion to set up a new organization to contribute to cleaner waters. 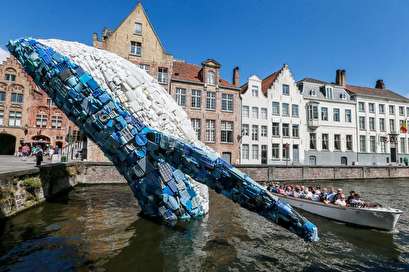 TEHRAN, Young Journalists Club (YJC) -The Alliance to End Plastic Waste was created "to advance solutions that eliminate plastic waste in the environment, especially in the ocean," France's Total oil and petrochemical producer said Wednesday in a statement which was similar to another published by Dow, and LyondellBasell.

The newly created environmental organization "has committed over $1 billion with the goal of investing $1.5 billion over the next five years."

While the statement did not provide the specific contribution per company, the $1 billion contributed by some 30 companies represents just over $30 million from each, with another $15 million added within the next five years.

"The Alliance is a not-for-profit organization that includes companies from across the global plastics and consumer goods value chain, including chemical and plastic manufacturers," Dow said in its statement. Dow said it is playing "a lead role" but didn't provide its contribution amount.

According to Polymer Database information, Dow in 2015 was the leading global supplier of polyethylene resin, which is the raw material used to make plastic bags, in addition to many other plastics including those used as containers for short-live household products. Dow had $49 billion in global sales that year, according to the data.

LyondellBasell said the effort is special as it "focuses the efforts and knowledge of plastics producers, consumer goods companies and retailers, as well as waste management companies."

The newly created organization's funds will be used to develop infrastructure to manage waste and increase recycling, innovate to make plastics more recyclable, educate governments and business, and to clean up "concentrated areas of plastic waste already in the environment."

The effort comes years after environmentalists and scientists warned about the dangers of plastic waste, with estimates going back to 2006 that plastic debris kills an estimated 100,000 marine mammals annually, as well as millions of birds and fish. The presence of large masses of plastic waste in oceans was detected years earlier.

Efforts to clean the ocean that have attracted most attention in recent years have involved initiatives by individuals like Boyan Slat, who started efforts as a teenager to help clean ocean waste

Slat, who has worked on inventions and struggled for funding, warns that ocean cleaning efforts must be urgently carried out before the plastic in the ocean fragments more, making it harder to collect. Organizations have warned this has already happened in some areas where small pellets that fragment have become part of plankton environments.

"What will happen over the next few decades is that these large objects will start breaking down into these small and dangerous microplastics, increasing the amount of microplastics dozens of times -- unless we clean it up. We must defuse this ticking time-bomb," he said in an October report.

According to the Center for Biological Diversity, at current rates plastic is expected to outweigh all the fish in the sea by 2050.

This would happen within a century of the initial discoveries by Karl Ziegler and Giulio Natta of catalysts that enabled production of common plastics that are now used as bags or plastic cup containers, furniture, mattresses, clothing, construction and water pipes, as well as for parts for autos, computers and numerous other products.