TEHRAN, Jan 28 -Iranian Foreign Minister Mohammad Javad Zarif says ties with the UAE have drifted into an “unacceptable” lane due to the strategic mistakes the tiny Arab country’s leaders have made over the past years. 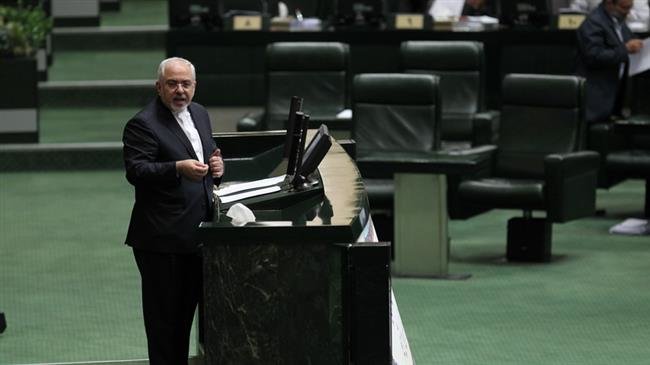 TEHRAN, Young Journalists Club (YJC) -“The UAE government, despite maintaining vast economic ties with Iran, has entered an unacceptable confrontational phase in its relations with the Islamic Republic due to the political and strategic mistakes of its leaders,” Zarif told a parliament session in Tehran Monday.

In November 2018, an Emirati official said his country was fully complying with the US sanctions imposed the same month on the Islamic Republic. Even before that, the UAE had taken a tougher line in accordance with Saudi Arabia’s hawkish policies on Iran.

Washington’s sanctions targeted Iran’s shipping sector as well as its banks and national airline, a decision that complicated Iranian oil tankers’ port calls in the UAE’s Fujairah port for fueling.

In response, Iran said it would start bunkering operations at a newly-built ship fueling terminal on the Persian Gulf island of Qeshm, which would reduce costs by as much as $5-7 per tonne.

Zarif said Iran was taking the necessary diplomatic measures to ensure Abu Dhabi would no longer violate the rights of Iranian traders working in the country.

At the same time, he said, Tehran was laying the required financial groundwork in other countries in the Persian Gulf region to replace the UAE and persuade its economic interests through those nations instead.

“That means countries that have better relations with Iran and maintain a more realistic view of regional developments,” Zarif stated.

Iran isolated US by sticking to nuclear deal

Zarif also defended Tehran’s decision to stay in the 2015 nuclear deal after US President Donald Trump’s decision last May to abandon the landmark agreement.

“We believe that, from the point of view of our national interests and considering all circumstances, the best choice has been made and this choice has put the US in a complicated situation which it desperately tries to get out of,” Zarif explained.

Following Trump’s decision to abandon the nuclear deal — known as the Joint Comprehensive Plan of Action (JCPOA) — the European signatories refused to follow suit and reiterated their commitment to the agreement.

In response to Trump’s threats to target all trade ties with Iran, the three European signatories — the UK, France and Germany — began working on a joint payment channel that would protect EU companies trading with Tehran from the US sanctions.

The anti-Iran push by the US took heavier blows this month, after Russia and a host of European countries turned down Washington’s invitation to partake in an anti-Iran summit that would be held in the Polish capital of Warsaw next month.

Zarif mocked Trump’s efforts to save the faltering summit, saying he was literally “begging” for support after Iran’s response forced Washington to tone down the event’s anti-Iran agenda