Syria ‘will not stand idly by in face of terrorist crimes’

TEHRAN, Mar 03 -Syria says it will not “stand idly by” while terrorist groups continue committing crimes against Syrian citizens and troops, following a deadly attack against government forces in the central Hama Province. 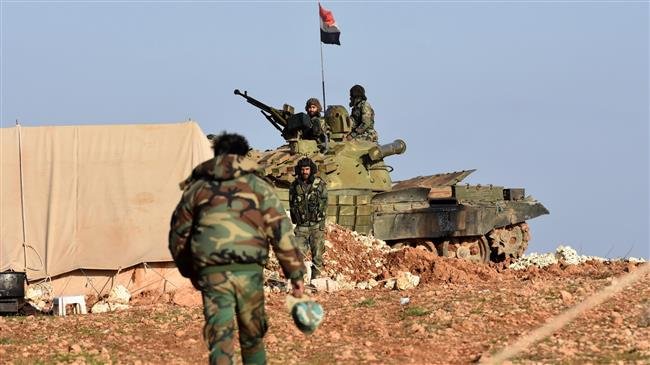 TEHRAN, Young Journalists Club (YJC) - Syria’s official SANA news agency said that a group of terrorists launched a pre-planned attack against Syrian armed forces deployed on the axis of al-Masasneh in the northern countryside of Hama at dawn on Sunday.

The report added that the terrorists, using various types of weapons and exploiting the bad weather conditions, killed a number of government troops, who managed to repel the attack and kill some of the terrorists however.

It did not specify the exact death toll from the side of army soldiers, but a report by the so-called Syrian Observatory for Human Rights (SOHR) said that the terror attack claimed the lives of “21 soldiers and allied forces,” adding that at least five terrorists were also killed during the exchange of fire.

The UK-based SOHR also added that the al-Qaeda-linked Ansar al-Tawhid terror group was behind the attack.

Later on Sunday, SANA cited an unnamed official at the Syrian Foreign Ministry as strongly condemning the terror attack, saying that it came “as a new episode in a series of the terrorist groups’ violations of the de-escalation zone agreement.”

Under a deal reached following a meeting between Turkish President Recep Tayyip Erdogan and his Russian counterpart, Vladimir Putin, in the Black Sea resort city of Sochi on September 17, all militants in a demilitarized zone that surrounds Idlib and also parts of the adjacent provinces of Aleppo and Hama were supposed to pull out heavy arms by October 17, and Takfiri groups had to withdraw by October 15.

The new attack is regarded as a flagrant violation of the demilitarized zone by terrorists.

Syria “will not stand idly by while such crimes continue to take place, as it will not allow the terrorists and those behind them to persist in their attacks against innocent citizens and the forces of the Syrian Arab Army,” the Syrian official stressed.

The official also affirmed the preparedness of the Syrian army in confronting such crimes, stressing Damascus’s right “to defend its sovereignty and the territorial integrity of the Syrian Arab Republic and the safety of its citizens all over Syrian territory.”

Since March 2011, Syria has been gripped by a foreign-backed militancy that has largely wound down.