MP’s letter to Rouhani: US additional conditions to humiliate Iran

Tehran, YJC. Ahmad Tavakoli has demanded Rouhani to disclose the results of Iran’s negotiations with the Six Powers. 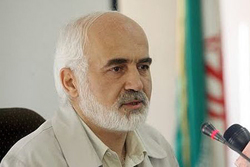 Principalist lawmaker in a letter to president Rouhani wrote "We trust the nuclear negotiators. However, we know them not to be mistake-proof. We expect more attention by you as the commander. Please let them confide to me and the nation the outcome of their measures.”

Pointing to the sanctions lifted following Iran’s negotiation with the Six Majors, Ahmad Tavakoli demanded that the government diversify its sources of import in trade in order to lessen dependency on special powerful countries.

The Tehran representative to the Majlis wrote "One of the things the opposite side has agreed to is to free a small part of the frozen assets existing in countries which had bought our oil. If we agree with the rival that domestic and foreign banks engaged in the transaction of that money have to get his approval it might have some aspect of the previous negotiations. But what justification is there telling us we must get US approval for the companies from which we want to buy things? Does your Excellency know that the respective ministry has introduced only 8 foreign companies to the P5+1 through the Foreign Ministry for buying the staples, of which they have agreed to only four? Do you know that the owners of all four companies are American? Are you aware that these four companies would not sell us staples during the Iraq-Iran war? While currency exchange is being conducted under their supervision, what difference does it make which company we buy from? Why does the US insist to impose such a thing on us? Can it have any other purpose but to scorn us, intending to restrict our sources for purchase and import, especially for the staples, to itself, thus creating another leverage by which to pressure us and maybe even intensify domestic restrictions?”