Tehran, YJC. The EUHR’s meeting with a number of women’s rights activists has been subject to much criticism calling the activists seditionists of the 09 election. 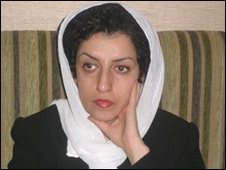 After meeting Iran’s political leaders, the High Representative of the Union for Foreign Affairs and Security Policy for the European Union met a number of women’s rights activists in Tehran.

Catherin Ashton left Iran but the Foreign Ministry is under heavy criticism especially by parliament members who say the visits were not coordinated. They further blast the visits by relating the activists to post-09 election events.

Narges Mohammadi, one of the activists whom Ashton visited, has said that the visit has been completely official and that she had been given official invitation before the meeting.

Speaking in interview with Radio Farda she stated "As Mrs. Ashton’s trip to Iran coincided with the international women’s day she would have liked to see some activist women. So they sent me an invitation which I accepted and we met her on that day.”

She further said "Whenever the talks are about women they can cover a large range of issues relating to women’s activities and rights. Human rights were discussed as well as current circumstances, what women demand and what their situations are and what priorities their demands address.”

"We talked also about human rights. The thing I said there of course was in relations to the necessity to form the civil society, since I believe that for it to be realized would meet many demands by various strata of society, including women. These were topics Mrs. Ashton and I talked about,” Mohammadi stated.