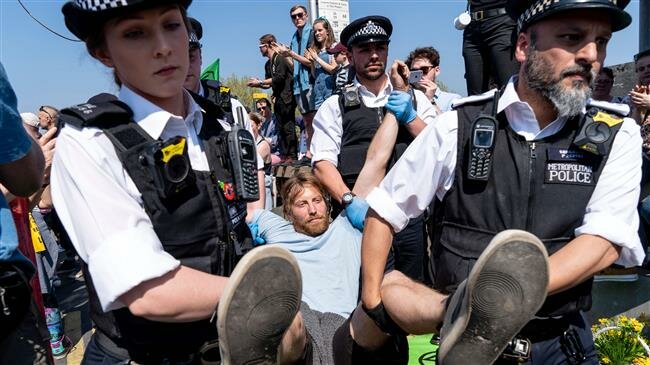 TEHRAN, Young Journalists Club (YJC) - Iranian Judiciary’s Human Right Council said on Tuesday that it was deeply concerned by the way climate activists were being treated by police in the capital city of London, saying UK authorities should respect international rules on protection of civil rights.

It also called on United Nations Human Rights Council to observe its declared mission and duties and study the case which it called a “blatant human rights violation”.

More than 1,000 people have been arrested and over 50 formally charged over attending protests in the British capital since earlier last week.

The protesters want a drastic change in UK government policies on environment, saying they will not leave the streets until their demands are met.

The activists insist the government and parliament should adopt specific legislation to guarantee that UK’s greenhouse gas emissions will be cut down to net zero by 2025.

After a week of protests, police announced on Monday that they will no longer tolerate disruptions to public transportation in certain areas of London.

Senior government officials and notable figures have also sought to belittle the action by using diminutive remarks about the protesters.

The protests come amid accusations that the UK government has been imitating the administration of US President Donald Trump in disrespecting international conventions on environment.

The government has mostly ignored calls for cancelling oil fracture operations in a site near Preston, in northern England, where activists have repeatedly clashed with police and workers of a major international energy company.