TEHRAN, May 05 - The United States has backed Israel’s deadly airstrikes and shelling of the Gaza Strip, describing the attacks as an act of self-defense. 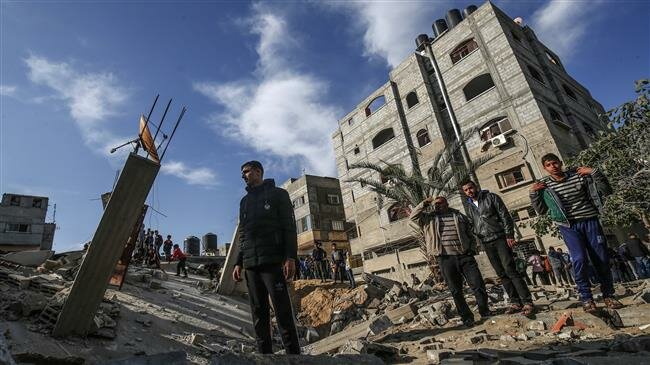 TEHRAN, Young Journalists Club (YJC) - This comes as a fresh flare-up of violence in the Gaza Strip caused by Israeli strikes and retaliatory Palestinian rocket attacks has entered its third day.

State Department spokesperson Morgan Ortagus said in a statement Saturday that “the United States strongly condemns the ongoing barrage of rocket attacks” by Palestinians, adding, “We stand with Israel and fully support its right to self defense against these abhorrent attacks.”

Tensions erupted on Friday following the killing of four Palestinians, two in an Israeli air raid on southern Gaza and two during the regime’s live fire at anti-occupation protesters near a fence separating the blockaded coastal enclave from the occupied territories.

The Israeli military claimed that its initial aerial assault had come in response to the wounding of two of its soldiers by Palestinian gunfire near the Gaza fence.

The latest rocket fire from Gaza killed a 60-year-old Israeli man. A total of some 83 Israelis have also been wounded.

The Tel Aviv regime says about 430 rockets have been fired at the occupied lands over the past few days. The Israeli army says its warplanes have targeted some 180 sites in the Gaza Strip.

Palestinian resistance movement Islamic Jihad has vowed to respond to Israeli crimes and defend Palestinian civilians in the face of the attacks.