US unbridled support behind Israel’s crimes in Gaza: Iran

TEHRAN, May 05 - Iran has slammed Israel's "brutal" airstrikes on the Gaza Strip, where at least 17 people, including women and children, have been killed since May 3, saying Washington's unbridled support is behind the Tel Aviv regime's crimes against humanity in the besieged Palestinian territory. 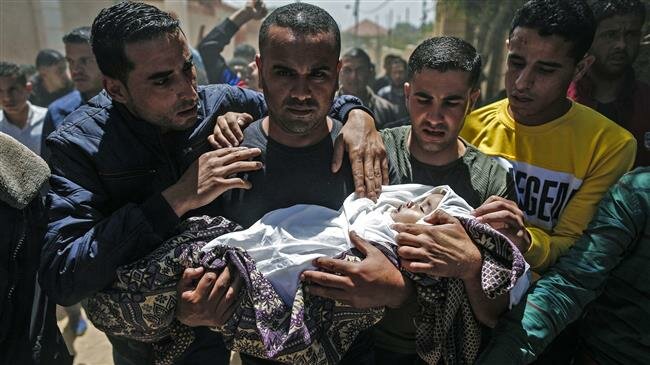 TEHRAN, Young Journalists Club (YJC) - "In light of the unlimited US support for this regime [Israel] and the shameful silence of certain Muslim countries, there will be no end to the Zionist crimes in the occupied Palestinian territories," Iranian Foreign Ministry Spokesman Abbas Moussavi said on Sunday.

The Iranian Foreign Ministry official hailed the legitimate struggle and resistance of the oppressed Palestinians against the Israeli regime and reiterated their right of self-defense in the face of Israel's crimes.

Tensions erupted in Gaza on Friday following the killing of four Palestinians, two in an Israeli air raid on southern Gaza and two during the regime’s live fire at anti-occupation protesters near a fence separating the blockaded coastal enclave from the occupied territories.

At least 17 Palestinians, including a pregnant mother and a 14-month-old baby girl, have so far lost their lives since the beginning of the Israeli regime's brutal attacks.

The Tel Aviv regime claims about 450 rockets have been fired at the occupied lands over the past days. The Israeli army says its warplanes have targeted some 180 sites in the Gaza Strip.

The latest rocket fire from Gaza killed a 60-year-old Israeli man. A total of some 83 Israelis have also been wounded.

The Gaza Strip has been under an Israeli siege since June 2007, causing a decline in living standards as well as unprecedented unemployment and poverty.

Israel has also launched several wars on the Palestinian coastal sliver, the last of which began in early July 2014.