TEHRAN, May 11 -Libya's internationally-recognized Government of National Accord (GNA) has called on US President Donald Trump to stop foreign support for "aspiring military dictator" Khalifa Haftar as his forces continue their all-out offensive to take over the capital Tripoli. 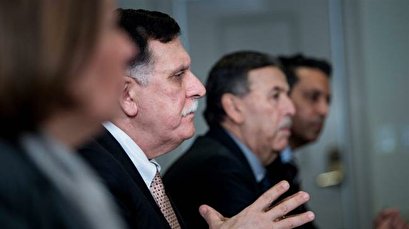 Sarraj told the Wall Street Journal on Friday that Haftar's US-allied backers were turning Libya into a proxy battleground and risking a war that could trigger further mass migration to Europe.

Serraj said hundreds of Libyans had been killed since Haftar’s LNA forces launched the offensive on April 4, more than 40,000 had been forced to leave their homes and "hundreds of thousands" could flee for Europe.”

"To prevent a bloody civil war with global implications, Libya needs the US to help stop other countries from meddling in our affairs," he added. "I remain hopeful that President Trump will succeed where previous presidents have failed...Libyans won't accept another Gaddafi-style military dictatorship."

The appeal came a day after the Tripoli-based government asked 40 foreign companies, including France's Total, to renew their licenses or have their operations suspended in the North African country, a move that placed economic pressure on Europe to stop Haftar's offensive.

European countries, including Italy and France, have taken a strong interest in Libya, both because of its natural resources and because of its status as a leading departure point for refugees and asylum seekers attempting to enter Europe across the Mediterranean Sea.

The supporters of the GNA also say France has blocked resolutions at the UN Security Council, the European Union, and other international organizations opposing Haftar’s takeover attempt.

Haftar’s forces are bogged down on the southern outskirts of Tripoli. Fighting has been escalating at night but slowing during the day as the Muslim fasting month of Ramadan began this week.

The renegade general has already defied a truce call by the United Nations (UN) and ordered his troops not to relent in their offensive and “uproot” the enemy during the holy fasting month.

The US president, in a phone call with the military strongman last month, "recognized Field Marshal Haftar's significant role in fighting terrorism and securing Libya's oil resources," according to the White House.

The LNA has almost two-thirds of the country and all of its oilfields under control, and some observers see the West's urge to court Haftar driven by their thirst for Libya's oil.

The United Nations has characterized Haftar’s push on Tripoli as an attempted coup and warned of a serious upshot.

Also on Friday, the UN Security Council sounded the alarm over the “worsening humanitarian situation” in the Libyan capital, calling on all warring parties to commit to a ceasefire and return to UN mediation.

The council "is deeply concerned about the instability in Tripoli and worsening humanitarian situation, which is endangering the lives of innocent civilians and threatens prospects for a political solution," said Indonesian Ambassador Dian Djani, whose country holds the council presidency for May.

The council "calls for all parties rapidly to return to UN political mediation, and to commit to a ceasefire and de-escalation to help mediation succeed," he added.

Meanwhile, analysts have warned that the battle between rival Libyan forces to control Tripoli has created a security vacuum, giving the Daesh Takfiri terrorist group a chance to re-emerge.

Libya expert Emad Badi says the fighting has given Daesh "the opportunity to reorganize, recruit and strike alliances with other groups (and organize attacks) to show they are still around."

Daesh has carried out two deadly assaults targeting Haftar's forces over the past week.

The first attack targeted a training camp in the southern city of Sebha on May 4, which left nine dead. The second raid took place in Ghodwa in the south on Thursday, killing two civilians.

Karim Bitar, director of research at the French Institute for International and Strategic Affairs, drew a parallel with Syria and Iraq, where the terrorist group built a "caliphate" after an offensive in 2014.

"In Libya, as in Iraq and Syria before it, ISIS took advantage of a vacuum... and the collapse of the state's structures to anchor itself," he said, using another acronym for the terror outfit. "As long as Libya is divided and as long as the state's sovereign authority is not re-established across the country, there is a risk that ISIS will be able to regain ground."

Libya has been the scene of increasing violence since 2011, when former dictator Muammar Gaddafi was toppled from power after an uprising and a NATO military intervention.

His ouster created a huge power vacuum, leading to chaos and the emergence of numerous militant outfits, including the Daesh terrorist group.