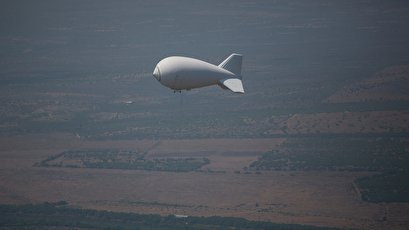 TEHRAN, Young Journalists Club (YJC) -The Defense Department's Southern Command (SOUTHCOM) commissioned the tests in mid-July, which are being carried out through a private aerospace and security firm, the Sierra Nevada Corporation, according to a Federal Communications Commission (FCC) filing made last month and published recently.

The goal of the project, according to the document, is to “Conduct high altitude MESH networking tests over South Dakota to provide a persistent surveillance system to locate and deter narcotic trafficking and homeland security threats.” Once airborne, the balloons are expected to spread across five additional Midwestern states: Minnesota, Iowa, Wisconsin, Missouri and Illinois.

Capable of reaching an altitude of 65,000 feet – well above the typical 35,000 foot cruising height of commercial jets – the balloons will share data with one another as they loom over American cities, each one observing a 25-mile area at a time. The device is equipped with a video surveillance and sensor system dubbed “Gorgon Stare,” specially designed to track vehicles on land or water, and named after the creature of Greek lore whose gaze turns men to stone. The system has previously been used on drones.

Though the stated purpose of the new spy tech is to help defend the “homeland,” some privacy advocates found the tests disconcerting.

“We do not think that American cities should be subject to wide-area surveillance in which every vehicle could be tracked wherever they go,” Jay Stanley, a policy analyst at the American Civil Liberties Union, told the Guardian. “Even in tests, they’re still collecting a lot of data on Americans: who’s driving to the union house, the church, the mosque, the Alzheimer’s clinic.”

We should not go down the road of allowing this to be used in the United States and it’s disturbing to hear that these tests are being carried out, by the military no less.