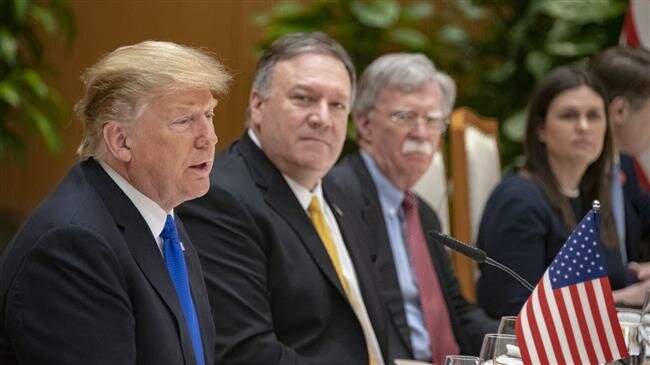 TEHRAN, Young Journalists Club (YJC) -  The officials involved in the disparate talks between the US and Iran told The Daily Beast on Wednesday that even the president is annoyed at the mixed signals the administration is sending to Tehran about its terms for new negotiations.

“Absolute amateur hour,” said one former senior administration official, who was involved in the internal squabbles.

The United States has for several months been actively attempting to pass messages via allies to Iran in an effort to move closer to beginning formal diplomatic talks with Tehran.

It has been leaning on mediators such as Oman, Switzerland, Japan, Iraq and France, according to two individuals involved in the behind-closed-door conversations.

However, according to two current US officials and another source with direct knowledge of the matter, diverging opinions within the Trump administration are foiling the nascent diplomatic process.
The officials told the US magazine that top Trump administration national security officials are divided about what to put on the table when it comes to negotiating with Tehran, including whether to ease a select set of sanctions, keep them in place, or suspend them altogether.

Two European officials and three individuals associated with brokering talks between Washington and Tehran said the tensions stem, in part, from President Trump’s desire to consider a new deal with Iran while some of his advisers are more reluctant to do so.

Tehran has, however, made it clear repeatedly that it will not any hold talks with the US under pressure, saying Washington must first lift all its economic sanctions before offering negotiations.

The clashing messages have been particularly bothersome to one go-between in particular—France.

Trump has expressed different views to the French, compared to those offered by his National Security Council and the State Department, on how to handle overtures to Tehran. In the meantime, the French have been caught in the middle.

“The French are justifiably anxious about whether they are getting clear and authoritative directives from the US,” said one former senior State Department official.

“There is no policy process for Iran. So of course the French are getting mixed messages. It’s not surprising that the administration says ‘Macron please do this’ and then to disavow that same instruction,” he said.

The official was referring to French President Emmanuel Macron, who has been engaged in dialogue with Iran in an effort to keep the 2015 nuclear deal going following the US withdrawal.

Trump had earlier in a tweet blamed Macron for sending “mixed signals” to Tehran.

The tweet confused not only French officials, but American officials, as well, who said they now fear the US has ostracized a strategic partner it was actively trying to win over when it came to Iran.

The French diplomatic push came as the US has taken a quasi-warlike posture against Iran in recent months, stepping up provocative military deployments in the Middle East and calling for the formation of a "multinational maritime" naval deployment in the region.

The initiative has so far failed to receive much support among many of Washington's key allies.

Iran has repeatedly stressed that foreign presence in the Persian Gulf is a lead cause for tension and that only regional cooperation between neighboring countries can assure the security of the vital international energy hub.

The contradictory messages are also causing headaches inside the upper echelons of the Trump administration, said the report.

According to a source that’s been in the room when those tensions have been discussed at the White House, the mixed signals annoyed the president on multiple occasions in recent months.

One source said that Trump had instructed subordinates several weeks ago to clear up the confusion and knock it off with the diplomatic discord.

US Republican Senator Lindsey Graham, a top Trump confidant and ally on Capitol Hill who has been working closely with administration officials who focus on Middle East policy to determine possible alternatives the 2015 nuclear deal, told The Daily Beast that the president was receptive to the push.

But even this effort is in part defined by the cognitive dissonance driving Trump’s thinking on Iran, said the report.