TEHRAN, August 20 - Head of a North Korean parliamentary delegation lauded the Iranian nation and government’s success in countering the US hostile policies and sanctions. 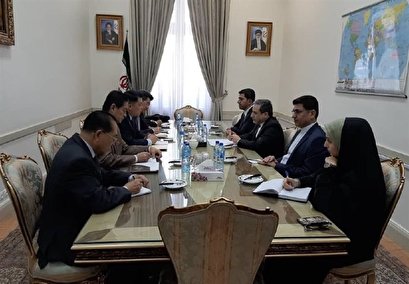 In the meeting, they talked about the enhancement of cooperation between Tehran and Pyongyang on the parliamentary, political, economic and international issues.

The Korean official described his delegation’s visit to Tehran as an ideal opportunity for the development of relations, and hailed the Iranian government and nation’s success in dealing with the US sanctions.

“The two countries have always enjoyed and will enjoy good and friendly ties in various arenas,” the North Korean official said.

For his part, the Iranian Deputy Foreign Minister congratulated Kim Jong-un on re-election as Chairman of the State Affairs Commission of the Democratic People's Republic of Korea, saying, “The US’ main instrument against independent countries, such as Iran and North Korea, is the use of economic sanctions. Nonetheless, it (the US) has been unable to shake the determination of the two countries over the past decades.”

“The US has proved to be an unreliable party for dialogue, both in the exit from the JCPOA and in the negotiations with North Korea. In an unusual measure in the international order, the US government has imposed sanction on Iran’s Minister of Foreign Affairs Dr. Zarif -who is widely acknowledged in the international arena- and, on the other hand, talks about negotiations,” Araqchi added.

The Iranian Deputy Foreign Minister also expressed the Islamic Republic of Iran’s readiness and willingness to broaden political interaction with North Korea at various levels, particularly by making preparations for Zarif’s trip to Pyongyang, in response to his Koran counterpart’s last year’s visit to Iran.