TEHRAN, August 25- Syrian army’s air defense systems have intercepted Israeli missiles flying above Damascus before they could inflict damage on targets in the capital city. 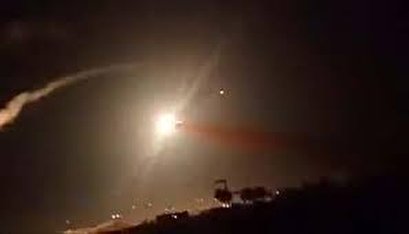 TEHRAN, Young Journalists Club(YJC) -The state news agency SANA said in a report late on Saturday that the ‘hostile targets’ were dealt with efficiently before they could reach their destinations south of Damascus.

The report said the missiles had been fired from the Israeli-occupied Golan Heights, adding that most of them had been downed in southern Damascus.

“At 23:30 (local time) our air defense forces detected hostile targets coming from the Golan towards the boundaries of Damascus,” said the report, adding, “The aggression was dealt with efficiently and as of now most of the hostile Israeli missiles have been destroyed before reaching their targets.”

The report came after witnesses said they had heard and saw explosions in the sky of Damascus.

An Israeli military spokesman confirmed the regime was behind the attacks, saying they had been meant to reach “Iranian” targets in Syria.

However, the Syrian military denied the claims, saying the majority of the Israeli missiles had been destroyed.

Israel has launched recurrent attacks on Syria in defiance of all international laws and regulations. The regime claims the attacks are targeted at certain militia forces linked to Iran.

Syria has condemned the attacks while rejecting Israeli claims about the presence of any Iranian forces or their allied militia in the country.

The Israeli attacks come as Syrian military forces are taking back control of more territories from terrorists.

Israel, believed to be a sympathizer of terrorism in Syria for the post eight years, has been unhappy at the progress made by the Syria army and allies east of the country.