TEHRAN, oct 2_US President Donald Trump has denounced as a "coup" the impeachment inquiry by Democrats over his controversial call to Ukraine's leader. 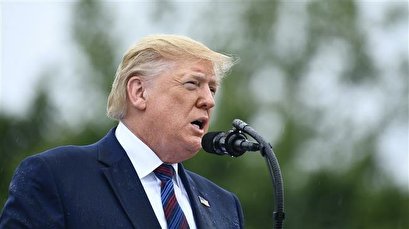 TEHRAN, Young Journalists Club(YJC)_"As I learn more and more each day, I am coming to the conclusion that what is taking place is not an impeachment, it is a COUP," Trump said in a tweet on Tuesday.

As I learn more and more each day, I am coming to the conclusion that what is taking place is not an impeachment, it is a COUP, intended to take away the Power of the....

The US president also claimed that the investigation into the Ukraine call and his impeachment was "intended to take away the Power of the People, their VOTE, their Freedoms, their Second Amendment, Religion, Military, Border Wall, and their God-given rights as a Citizen of The United States of America!"

Trump reportedly urged Zelensky about eight times during the phone call to work with his lawyer Rudy Giuliani to investigate government corruption involving Biden and his son, Hunter.

The US president dismissed the Ukraine allegations as another witch-hunt attempting to smear his already tarnished reputation and damage his popularity as the Americans get closer to the 2020 presidential election.

According to the Reuters/Ipsos poll on Tuesday, nearly half of Americans believe Trump should be impeached, a figure that increased by 8 percentage points during the past week as more people learned about the scandal.

The opinion poll found that 45 percent of adults believe the US president "should be impeached," compared with 37 percent in a similar poll taken last week.

The poll findings reflect several other recent surveys, which have shown that support is increasing among Americans for an impeachment inquiry into Trump.