TEHRAN, oct 8_Iraq’s President Barham Salih has condemned as “unacceptable’’ the recent acts of violence targeting protesters, journalists and security forces amid a spate of unrest gripping the Arab country, warning against foreign attempts to fish in troubled waters. 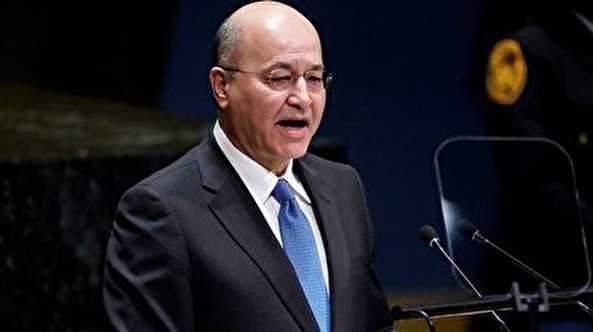 TEHRAN, Young Journalists Club(YJC)_“The targeting of peaceful demonstrators and security forces with live bullets, and the targeting of media and media workers is unacceptable in Iraq, which we have pledged to be a democratic, in which rights and freedoms are respected, and where all abide by the Constitution,” Saleh said during a televised speech on Monday.

A wave of protests began in Baghdad and some other cities a week ago, with the participants calling for better living conditions and more government efforts to end the nation’s economic woes less than two years after the country declared victory over the Takfiri Daesh terror group.

The initially peaceful protests, however, turned ugly after armed elements and violent rioters entered the scene, starting to vandalize public property and attempting to enter the Green Zone in Baghdad — which houses government offices and foreign diplomatic missions.

The rioters also attempted to take over local TV stations in the capital Baghdad over the weekend after the government removed a days-long curfew.

On Sunday, the Interior Ministry said 104 people, including eight security officers, had been killed and more than 6,000 people wounded in the mayhem.

Iraqi officials say there are “malicious hands” and “infiltrators” behind the killing of both protesters and security forces during the unrest.