TEHRAN, oct 10_US President Donald Trump has defended his move in abandoning America’s Kurdish allies in the face of a Turkish invasion of northern Syria, saying the decision is justified as the Kurds didn't help the US during World War II. 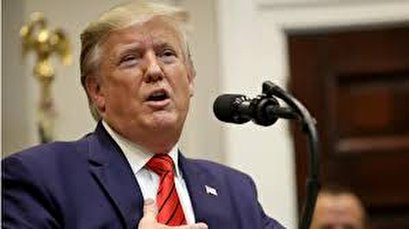 Trump said of the Kurds, referring to the June 1944 attack by the WWII allies against German positions at the French beach.

Trump failed to mention that the Kurdish-dominated area on the border between Iraq, Syria and Turkey is located some 4,000 kilometers (2,500 miles) from Normandy, France.

Asked by reporters whether his treatment of the Kurds sent a poor message to other allies, Trump said, "Alliances are very easy" and it "won't be" hard for Washington to found new partners.

Turkey on Wednesday began pounding positions of the Syrian Democratic Forces (SDF) – America’s partner in its alleged war against the Daesh -- with jets and artillery and sent in troops to purge them from the area east of Euphrates.

Turkish Presdident Recep Tayyip Erdogan argued that the offensive was necessary to create a safe zone that could accommodate the return of over 3 million refugees.

The offensive came three days after Trump, in a sudden change of policy, told Erdogan that he would pull US troops from the area, effectively exposing the Kurdish militants to Turkey, their archenemy.

Earlier on Wednesday, Trump said in a statement released by the White House that he never endorsed the Turkish operation – dubbed Peace Spring.

He said the invasion was a "bad idea" but stopped short of revealing Washington’s next step and whether it would ever move tp stop Turkey’s actions.

Trump added that Washington has paid the Kurds millions of dollars and had no responsibility to protect them.

The Kurds "are there to help us with their land, and that's a different thing," said Trump.

Some US senators are preparing a bill to impose sanctions against Turkey for attacking US allies.