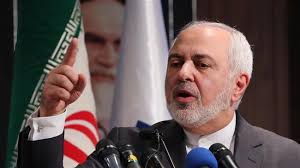 TEHRAN, Young Journalists Club(YJC)_Iran's top diplomat made the remarks while answering a question posed by Yemen’s Arabic-language al-Masirah news agency on the sidelines of a conference held in Tehran on Monday themed “Unilateralism and International Law.”

“If suitable conditions are provided, I would be ready to travel to Riyadh to settle differences” between the two countries, Zarif was quoted by ISNA as saying.

"Tehran welcomes any initiative that aims to ease tensions in the region and will cooperate [with other parties] to end Yemen’s war," he added.

Zarif once again reiterated the Islamic Republic's policy for supporting the Yemeni people, saying, "Iran will always stand by the Yemeni nation and we believe that the end of war will first of all help the Yemeni people."

Elsewhere in his remarks, the Iranian foreign minister said he is in constant contact with Pakistani Prime Minister Imran Khan in relation to developments in Yemen.

The Pakistani prime minister made an official visit to Tehran earlier this month and held talks with Leader of the Islamic Revolution Ayatollah Seyyed Ali Khamenei and President Hassan Rouhani.

In his meeting with Khan, Ayatollah Khamenei said a proper end to the ongoing war waged by Saudi Arabia and its allies on Yemen can have "positive" effects on the region, highlighting Iran's plan as a suitable solution to this crisis.

"The Islamic Republic of Iran has for a long time presented a four-point plan to end the war in Yemen," Ayatollah Khamenei said, adding, "The end of this war in the proper way can have positive effects on the region."

Saudi Arabia and a number of its regional allies launched a devastating military campaign against Yemen in March 2015, with the goal of bringing the government of former president Abd Rabbuh Mansur Hadi back to power and crushing the Houthi Ansarullah movement.

The US-based Armed Conflict Location and Event Data Project (ACLED), a nonprofit conflict-research organization, estimates that the war has claimed more than 91,000 lives over the past four and a half years.

The war has also taken a heavy toll on the country’s infrastructure, destroying hospitals, schools, and factories. The UN says over 24 million Yemenis are in dire need of humanitarian aid, including 10 million suffering from extreme levels of hunger.

Speaking at a press conference in the Yemeni capital city of Sana’a on Saturday, the Yemeni minister of public health and population criticized the United Nations and the World Health Organization (WHO) for their failure to open a humanitarian medical air bridge for Yemeni civilians, who are suffering from conditions that cannot be treated inside the war-battered Arab country.

Taha al-Mutawakel said the international bodies have not managed to ensure a mechanism for the medical transfer of critically ill patients, by chartered air flight, to medical facilities abroad that are equipped to handle such cases, slamming the international community’s silence on the gradual death of 30,000 patients, who are in dire need of treatment outside Yemen.

We are always ready to travel to neighboring states: Zarif

Later on Monday, Zarif visited an industrial complex in Tehran Province, on the sidelines of which he talked to reporters, further explaining about his readiness to visit Saudi Arabia.

.@realDonaldTrump 's #EconomicTerrorism is out to block them and their ideas, but they're relentless in pursuit of dreams. pic.twitter.com/cMqqBiCJWl

"The Islamic Republic's [friendship] hand has been always extended toward regional countries and if there are [necessary] grounds and neighboring countries are also ready for cooperation, we will definitely be prepared [to do this]," Zarif pointed out.

Speaking to reporters on the sidelines of the International Conference on Unilateralism and International Law, Zarif pointed to a recent warning given to Iran by the Paris-based Financial Action Task Force (FATF), noting that the decision was purely motivated by political reasons.

“The Islamic Republic of Iran has been pursuing the fight against money laundering as a necessity measure and goal, and the decision made by the FATF is completely political and we are totally opposed to it,” Iran's top diplomat said, adding, “However, for the sake of our own national interests, we have taken all necessary measures to fight financing terrorism and prevent money laundering.”

The FATF has given Iran a final deadline of February 2020 to tighten its rules against money laundering in compliance with the global watchdog’s financial standards.

“If before February 2020, Iran does not enact the Palermo and Terrorist Financing Conventions in line with the FATF Standards, then the FATF will fully lift the suspension of counter-measures and call on its members and urge all jurisdictions to apply effective counter-measures, in line with recommendation 19,” the FATF said in a statement on October 18.

It also expressed “disappointment” that Iran has so far failed to adopt the FATF standards, saying that Tehran is expected to “proceed swiftly in the reform path to ensure that it addresses all of the remaining data-x-items by completing and implementing the necessary Anti-Money Laundering and Counter-Terrorist Financing reforms.”

Iran's foreign minister also hailed the approval of a bylaw for combating money laundering by the Iranian executive and judicial powers as an important step taken by the country, noting, “This is a detailed bylaw and we hope further steps would be taken … to strip those parties, who do not seek Iran's interests and are against us, of their excuses.”