TEHRAN, Nov 9 _The “brutal” prison conditions of Egypt's former president, Mohamed Morsi, may have directly led to his death, according to a report by UN experts. 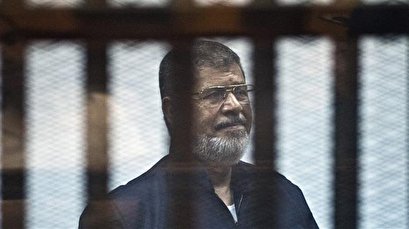 TEHRAN, Young Journalists Club(YJC)_“Dr. Morsi was held in conditions that can only be described as brutal, particularly during his five-year detention in the Tora prison complex,” a panel of UN experts - including Agnes Callamard, special rapporteur on extrajudicial, summary or arbitrary executions - and the UN Working Group on Arbitrary Detention reported on Friday.

“Dr. Morsi’s death after enduring those conditions could amount to a state-sanctioned arbitrary killing."

“The authorities were warned repeatedly that Dr. Morsi’s prison conditions would gradually undermine his health to the point of killing him. There is no evidence they acted to address these concerns, even though the consequences were foreseeable," the experts said.

In a joint statement on Friday, Egypt's former minister of Planning and International Cooperation, Amr Darrag, called the report "a significant step forward in holding such regimes accountable for their actions".

Senior members of Morsi's former government also welcomed the report, calling on the UN to extend its investigation to include the ‘suspicious circumstances’ surrounding the death of Morsi's son, Abdullah, who reportedly died of a heart attack on September 4.

Abdullah Morsi, 25, had been in touch with the UN to formally complain about his father’s death just before he died.

The UN experts warned that thousands more prisoners in Egypt were enduring similar conditions, and their 'health and lives' may also be at severe risk.

“We have received credible evidence from various sources that thousands more detainees across Egypt may be suffering gross violations of their human rights, many of whom may be at high risk of death," the statement said. "This appears to be a consistent, intentional practice by the current Government of President Abdel-Fattah El-Sisi to silence dissenters."

Morsi, a senior figure in the Muslim Brotherhood organization, was Egypt’s first democratically-elected president after the 2011 revolution, but he was deposed following a military coup led by Abdel Fattah el-Sisi in July 2013.

Morsi suffered from medical neglect during his incarceration as well as poor jail conditions.

The 67-year-old former president fainted during a court session on June 17 and died afterwards.

The Muslim Brotherhood has labeled Morsi’s death a full-fledged murder.

Last year, a report by a panel of UK legislators and attorneys warned that the lack of medical treatment could result in Morsi's "premature death.”

The panel said that Morsi was being kept in solitary confinement for 23 hours a day, which under UN guidelines, would qualify as torture.

During the past few years, Sisi has faced growing criticism about his way of treating dissidents, especially those linked to the Muslim Brotherhood movement.