Hong Kong’s leader lashes out at US over new legislation

TEHRAN, Dec 3_Hong Kong’s leader says recent legislation passed by the United States in support of anti-government protesters in the Chinese city constitutes outright interference and is “most regrettable.” 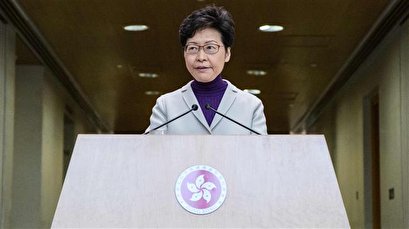 TEHRAN, Young Journalists Club(YJC)_We don’t see any need for this proposed law and we don’t see any justification for it,” Chief Executive Carrie Lam said on Tuesday, referring to the so-called Hong Kong Human Rights and Democracy Act, which was signed into law by President Donald Trump last week.

“Human rights and freedoms are protected by the Basic Law here in Hong Kong,” she added. The Basic Law is Hong Kong’s mini-constitution.

“There is an overseas parliament and an overseas government that has interfered with Hong Kong’s affairs and that is most regrettable,” Lam said.

Under the new US law, Washington would be allowed to impose sanctions on Hong Kong or even suspend the city’s special trading status over what it describes as rights violations.

Lam said Hong Kong would feel an impact once the bill is implemented and US companies in the city would also be among those affected.

“The impact currently is on confidence... because corporate will be worried about the actions the US government may take in the future after they review this legislation,” she said.