China slams US, other states for congratulating Tawain’s Tsai on election win

Tehran 13 January_Beijing has slammed the United States and other states for breaching the ‘One China’ policy by offering congratulations to President Tsai Ing-wen of self-ruled Taiwan on her re-election. 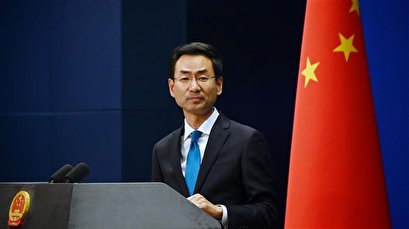 TEHRAN, Young Journalists Club(YJC)-Chinese Foreign Ministry spokesman Geng Shuang was reacting on Sunday to the statements issued by US Secretary of State Mike Pompeo as well as top diplomats from Britain and Japan to congratulate Tsai, a strong opponent of the internationally-recognized ‘One China’ principle.

Tsai, of Taiwan’s pro-independence Democratic Progressive Party, was re-elected over the weekend with some 57 percent of the vote, while Beijing-friendly rival Han Kuo-yu from the opposition party Kuomintang received 39 percent.

Sheng further said Taiwan — which is viewed by Beijing as a wayward province — was “a local affair in China.”

“China expresses its strong dissatisfaction and firm opposition to [the congratulatory messages] and has made solemn representations to the countries concerned,” Geng was quoted by the state-run Xinhua news agency as saying.

“It is hoped that the countries concerned will earnestly abide by the ‘One China’ principle, not develop any official relations and conduct any official exchanges with Taiwan, handle Taiwan-related issues prudently and properly, not send any wrong signals to Taiwan pro-independence forces,” he added.

China considers Taiwan part of its territory under the ‘One China’ policy, which refers to the diplomatic acknowledgement that there is only one state called China, despite the existence of two governments, one in Beijing and another in Taipei.