Tehran 26January_Despite conflicting official statements by the Trump administration about the reason behind its decision to target Iran’s most celebrated military official, the US is adamant that its assassination of Qassem Soleimani and refusal to leave Iraq is about “protecting Americans”. 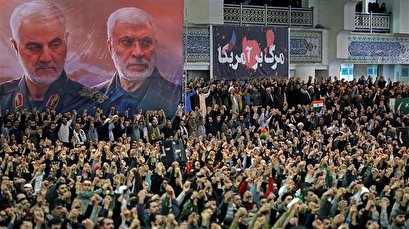 TEHRAN, Young Journalists Club(YJC)_From versions advanced publicly by former CIA chief Pompeo now serving as Trump’s trigger-happy secretary of state, during his TV-road show, the world was told that Qassem Soleimani was killed because he posed an “imminent” threat.

This “official” narrative was spun to convince Trump’s domestic audience that though the Democrats had ganged up against him, he remained concerned about America’s safety and thus eliminated “bad” persons.

The targeted assassination of Qassem Soleimani and a senior Iraqi military leader Abu Mahdi al-Muhandis has raised serious questions about Trump’s real motivation. Notwithstanding the so-called justification being a vague, unproven claim of “imminent” threat of violence against Americans, Trump himself shot it down by saying that it “doesn’t really matter” whether Soleimani and al-Muhandis posed an imminent threat.

In other words, as Commander-in-chief of America, I, Donald Trump can authorize the killing of anyone, regardless of whether the person singled out for extra-judicial execution is a serving official of any country, and it matters not whether the person poses an imminent threat