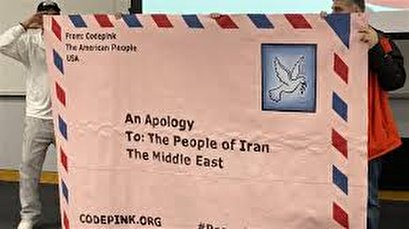 TEHRAN, Young Journalists Club(YJC)_"As Americans committed to peace and the safety of all people, we, the undersigned, apologize for the actions of our reckless, hate-filled president," the letter by CODEPINK reads. The activists further to “do everything we can to stop Trump's aggression, remove the crippling sanctions you are suffering under, and resume a process of diplomacy with your country."

“The American people do not want a war with Iran. We want to live in peace and harmony. Please accept our hand in friendship. May the peacemakers prevail over those who sow hatred and discord.”

The peace advocacy group is sending the letter, both in English and Farsi, and a video version to the Iranian press.

The Farsi version of the apology letter has been read out by Jewish American graduate student Lindsay Saligman, who traveled to Iran in March 2019. She has since worked to promote greater understandings between Iranians and Americans.

President Trump brought the US and Iran to the brink of a military conflict early this month by ordering a drone strike that assassinated General Soleimani in Baghdad.

Soleimani, commander of the Quds Force of Iran's Islamic Revolution Guards Corps, has been hailed in the region for leading the fight against terrorist groups like Daesh.

Iran responded to Trump’s aggression by launching a ballistic-missile attack on American military posts in Iraq.