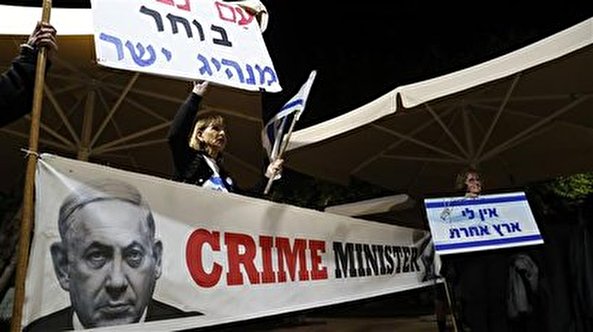 TEHRAN, Young Journalists Club(YJC)_According to a New York Times report on Sunday, the plan, for which the Israeli premier is set to meet with Trump in the White House on Monday and Tuesday, is “mainly a booster shot for Mr. Netanyahu’s desperate campaign to stay in power.”

Netanyahu’s rival Benny Gantz is also set to meet with the US president separately.

The Deal of the Century: Trump helps Netanyahu in each of Israel's 3 elections over the past year; Does everything he can to help Netanyahu survive. In return Bibi helps Trump get re-elected in November (Evangelical voters). Peace has nothing to do with it https://t.co/NaOhr3QEZX

The Israeli prime minister has vowed to “make history” by the plan, about which Trump has been haranguing since his own campaign days for the US 2016 presidential election.

This is while no Palestinians are supposed to take part in the in the plan, clearly because the US now recognizes Jerusalem al-Quds  as the Israeli capital.

On the other hand Trump is meddling with the  Israeli election, apparently in favor of Netanyahu.

Netanyahu and Gantz are invited by Trump to the US on Tuesday to discuss the annexation of all illegal colonies and the Palestinian Jordan Valley and put it under the sovereignty of the so called Israel, as if we don't exist at all, discussing our future, pic.twitter.com/G0YTBiQ6OO

“For him to do this in the middle of an Israeli election, without any Palestinian participation and with no intention to follow up with any of the participants, shows this is not a peace plan at all,” said Martin S. Indyk, who served as special envoy for Israeli-Palestinian negotiations under President Barack Obama. “It is a farce from start to finish.”

Trump has been bragging about clinching a deal between Tel Aviv and Palestinians, who are under daily aggression by the Israeli regime. In the meanwhile, he has proven to be one of the most pro-Israeli presidents in US history.