Tehran 9 February _Turkey says it will change tack in northwestern Syrian province of Idlib, where an intensified anti-terror operation is underway by Syrian army against foreign-backed militant outfits, if the deal reached with Russia is violated. 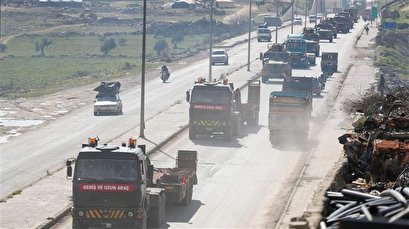 TEHRAN, Young Journalists Club(YJC)_Turkey’s Defense Minister Hulusi Akar said, in an interview with the Hurriyet daily that Ankara has made alternative plans for Idlib province if the agreement reached with Russia continues to be violated.

Based on a 2018 deal with Russia, Turkey set up 12 observation posts in Idlib, but Turkish security sources said this week three of them are now being encircled by the Syrian government forces.

The Turkish defense minister warned that "If the Syrian forces are not withdrawn by the end of February, we will take action."

Akar claimed that "Our primary goal is to prevent migration and humanitarian tragedy. We are working to establish a ceasefire as soon as possible and stop the bloodshed."

Since Friday, Ankara has sent hundreds of military vehicles into Idlib province, after Syrian government forces took control of a strategic town close to the provincial capital.

The UK-based so-called Syrian Observatory for Human Rights said 1,240 Turkish military vehicles crossed into Idlib in the last week, along with 5,000 soldiers.

Idlib is in the last major enclave of the foreign-backed terrorists fighting against the rule of Syrian President Bashar al-Assad.