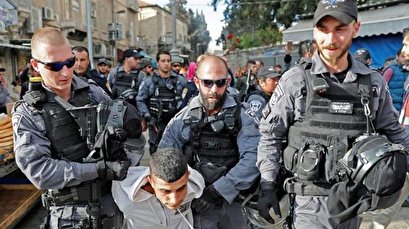 TEHRAN, Young Journalists Club(YJC)_Their lawyers and relatives said the prisoners were tortured to the point of needing hospitalization, the news agency reported on Monday.

Shin Bet has identified the trio as the main suspects in an explosion that took place in the occupied West Bank last August. Tel Aviv claims the incident killed a 17-year-old Israeli female and wounded her father and brother.

One of the men was hospitalized with kidney failure and 11 broken ribs. Another was nearly unrecognizable to his wife when he was wheeled into a courtroom, and a third was stitched up after being attacked by a security dog, the news agency said.

Last September, The Times of Israel said one of the detainees had been hospitalized in “critical condition.” He had been arrested earlier that month, but released due to a lack of evidence before being nabbed again, the paper wrote.

According to Israel’s Ha’aretz daily, Shin Bet was given “legal permission” to employ “extraordinary measures” against the suspect.

Tel Aviv already uses the “administrative detention” which enables it to arrest Palestinians without any charge.

Several other Palestinians swept up by the Israeli agency say they were threatened, beaten, forced into painful stress positions, and denied sleep, the AP added.

The Public Committee Against Torture, an Israeli body, says more than 1,200 complaints have been filed against Shin Bet since 2001, without even one going to trial. Only one criminal investigation has been launched, over a 2017 case involving alleged rape, and it is still open