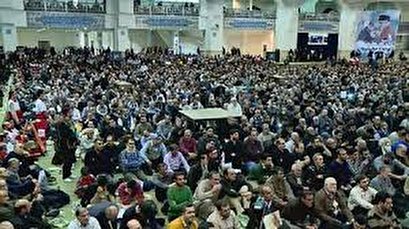 TEHRAN, Young Journalists Club(YJC)_The ceremony was held on Thursday, with throngs of people as well as ranking government and military officials, including top commanders of Iran’s Islamic Revolution Guards Corps (IRGC), in attendance.

The terrorist US forces assassinated General Soleimani, the former commander of the IRGC's Quds Force, along with Abu Mahdi al-Muhandis, deputy head of Iraq’s Popular Mobilization Units (PMU), known as Hashed al-Sha’abi in Aabic, and their companions by targeting their car on January 3.

General Soleimani, who had earned reputation as the region’s most popular anti-terror military figure, was on an official visit to the Iraqi capital when the attack took place.

Addressing the ceremony, Brigadier General Esmaeil Qaani, the Quds Force’s new commander, recited parts of Gen. Soleimani’s last will, in which he had advised the Iranian people and politicians to rally behind Leader of the Islamic Revolution Ayatollah Seyyed Ali Khamenei in order to promote the goals of the Revolution.