Tehran 14 February _Bahrain's most prominent Shia cleric Ayatollah Sheikh Isa Qassim has severely denounced US President Donald Trump's so-called deal of the century on the decades-old Israeli-Palestinian conflict as treason and an act of aggression against the entire Muslim world. 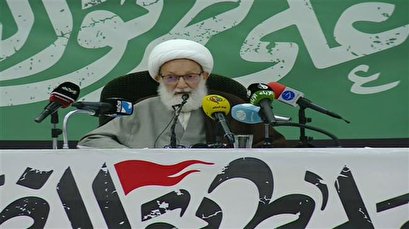 TEHRAN, Young Journalists Club(YJC)_“The plan is an aggressive position against the whole Muslim Ummah, which the United States, Israel and those who have contributed to it are seeking to advance. This is an act of high treason,” the cleric said at a ceremony marking the ninth anniversary of Bahrain’s popular uprising against the ruling Al Khalifah regime in the Iranian city of Qom on Thursday night.

On January 28, Trump unveiled his so-called deal of the century, negotiated with Israel but without the Palestinians.

Palestinian leaders, who severed all ties with Washington in late 2017 after Trump controversially recognized Jerusalem al-Quds as the capital of the Israeli regime, immediately rejected the plan, with President Mahmoud Abbas saying it “belongs to the dustbin of history.”