Tehran 18 February _Venezuelan President Nicolas Maduro says the United States and some of its allies are plotting to invade Venezuela and that the South American country is “not afraid of military combat.” 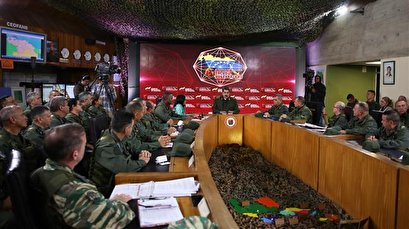 TEHRAN, Young Journalists Club(YJC)-In a televised speech on Monday, Maduro said the US had assembled a “mercenary force” to invade Venezuela.

“We don’t want war; we don’t want violence; we don’t want terrorism, but we are not afraid of military combat and we are going to guarantee peace,” said the Venezuelan president, surrounded by the armed forces’ high command.

The US has been carrying out a pressure campaign against Maduro’s government and urged the armed forces to turn against him. Washington has been backing opposition figure Juan Guaido in his attempts to topple the government in Caracas, including through a recent coup that failed.

The administration of US President Donald Trump has also imposed several rounds of sanctions against the oil-rich country aimed at ousting Maduro and replacing him with Guaido.

Guaido is considered responsible for causing political crisis in Venezuela when he unilaterally declared himself “interim president” of the country in January last year, rejecting the outcome of the May 2018 election, which Maduro had won.

Maduro said there were groups of military “deserters” training in neighboring Colombia to “enter silently and attack military units.”

He said military exercises were conducted over the weekend in reaction to threats of aggression orchestrated by the US, Colombia, and Brazil.

Venezuela’s armed forces and civilian militia on Saturday kicked off two-day nationwide military drills, dubbed the Bolivarian Shield 2020 Operation. According to official figures, about 2.4 million forces participated in the drills.

The exercises were conducted “based on real threats, not imagined ones,” Defense Minister General Vladimir Padrino, who was seated next to Maduro during the president’s Monday speech, said.