Tehran 21 February _Libya’s self-styled commander Khalifa Haftar says he would be ready for a ceasefire, on condition that Turkish forces leave the country and Ankara stops providing the country’s UN-recognized government with weapons. 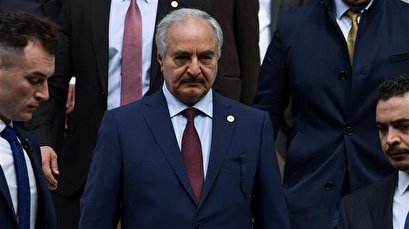 TEHRAN, Young Journalists Club(YJC)-"A ceasefire (would be) the result of a number of conditions being fulfilled,” Haftar said in an interview with Russian news agency, RIA on Friday.

He called for “the withdrawal of Syrian and Turkish mercenaries, an end to Turkish arms supplies to Tripoli, and the liquidation of terrorist groups” in the capital.

Haftar’s eastern-based Libyan National Army (LNA), backed by Saudi Arabia, Egypt and the UAE, launched an offensive in April to wrest control of Tripoli from the Government of National Accord (GNA), led by Prime Minister Fayez al-Serraj.

The offensive has so far killed 1000 people and displaced some 146,000 people, according to United Nations figures.

Back in November, he signed a military cooperation deal with Turkish President Recept Tayyip Erdogan, under which Ankara agreed to send troops to support GNA forces.

As part of the offensive, Haftar’s forces attacked a key port in the capital on Tuesday. In response, Seraj said he suspended UN-brokered peace talks.