Tehran, Olli Heinonen has expressed his view of the upcoming meetings between Iran and the six powers on the country’s nuclear case. 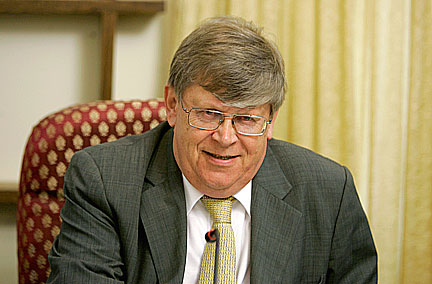 Former IAEA inspector Olli Heinonen’s correspondence with Mehr News Agency on the horizon of Iran’s nuclear deal with the West:

1-As you know Iran and six world powers start a new round of talks onJuly 2and will continue until at leastJuly 15, so is it possible they reach comprehensive deal in the end of talks?

It appears that the views of parties are still far apart when it comes to the establishment of "a mutually defined enrichment programme with practical limits and transparency measures to ensure the peaceful nature of the programme” of Iran, which is one of the key objectives of the Joint Plan of Action. The gap is wide, but two weeks of negotiations is also quite long time in international diplomacy. Question is then whether innovative solutions are found to bridge the gaps. It will be tough, but it is doable.

2- Senior diplomats from six world powers met in Brusselson Thursdayto search for ways to resuscitate negotiations with Iran, is there any problem within the six powers group about Iran nuclear issue?

Each power have likely its own concerns and understanding on risks and priorities. However, we need to keep in our minds that five of these powers are permanently in the UN Security Council, which has made half a dozen resolutions on the Iranian nuclear activities. Those resolutions spell clearly out that they have a common concern about scope and content of the nuclear program of Iran.

3- In previous talks Iran and six world powers said there are difference views about comprehensive deal, what are these differences?

There are number differences from the number of centrifuges installed, stocks of enriched uranium, redesign of Arak heavy water reactor, addressing of the military dimensions to sanctions relief and to the length of the agreement.

4-Western officials have said very little progress has been made after five rounds of talks since February towards striking a deal that could end years of hostility, how is possible this little progress to change a big progress?

This is about confidence building, which will take time. The first step is to have confidence that deal is faithfully implemented when agreed. The next step to build confidence is then the actual implementation of the deal on ground; as they say, the taste is in the pudding.

5-Six powers want it to cut down the number of uranium centrifuges in operation, but Iran do not accept this issue yet, as you know Iran do not seek for nuclear weapon but six powers want to reduce the centrifuge, how is it possible two sides solve these differences?

When I look back to the history of the Iranian nuclear program I see that Iran holds most of the keys to solve this part of the problem. In order to reduce the confidence deficit, Iran should come with realistic numbers of centrifuges, which are really needed to develop its nuclear program further. One of the questions to address is that does it really make sense to produce fuel for one or handful of light water reactors domestically. Most of the countries have opted for buying fuel from commercial vendors, which produce it economically and can ensure the safety and quality of deliveries. Fuel manufacturing has its own know-how, which can only be obtained from the reactor designer. In addition, it is not only about enrichment or fuel fabrication. One needs also uranium, which resources are limited in Iran. By being also more forthcoming is addressing questions related to the military dimension of the nuclear program, Iran can pave way for a comprehensive agreement. Addressing these questions would enable the other party be more forthcoming on the parameters for the future of the uranium enrichment programof Iran.