A senior Iranian military commander says the Army’s Ground Forces are set to unveil five new healthcare-related achievements that will help with the diagnosis of COVID-19 and prevent the deadly coronavirus from spreading. 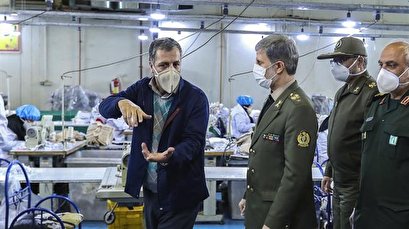 The Army, he said, is advancing “a mega project for sterilizing cities and open areas,” which has already been put into use.

The Iranian commander further enumerated a set of measures adopted by the Armed Forces to help eliminate the disease, including the launch of convalescent centers and mobile hospitals, as well as the production of masks and disinfectants.

He said that the Iranian Army has made available some 28 hospitals and 12,000 medical staff, as well as 9,900 hospital beds to the country’s Health Ministry.

The virus first emerged in China and later spread to other world states. Iran — the hardest hit by the disease in the Middle East — has confirmed 74,877 infections and 4,683 deaths since the outbreak was reported in the country in late February.

Besides the five items, several other achievements in the field of cybersecurity, Information and Communications Technology (ICT) and mobility will be unveiled during the Wednesday ceremony, said the commander.

He added that various armored vehicles have been manufactured domestically, noting that different types of anti-tank missiles will also be put on display during the ceremony.