Tehran, 15 May _Venezuelan troops have arrested 39 army forces on the Colombian border, over a recent botched plot to kidnap President Nicolas Maduro. 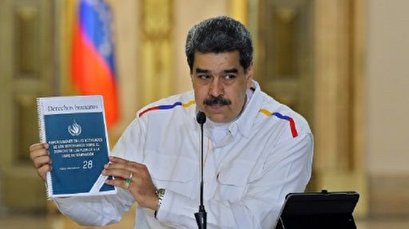 Defense Minister Vladimir Padrino said in a televised speech on Thursday that troops had “captured 39 deserters trying to enter by the Colombian border."

He said the detainees were “part of the general scheme" to overthrow Maduro, but did not provide further details

In an incident earlier this month, a group of US-backed mercenaries tried to intrude into the northern state of La Guaira using high-speed boats, but Venezuelan authorities foiled the attack, which had been launched from Colombia.

They killed eight of the armed men and arrestedtwo others.

Among the detainees are two former US troops, Luke Denman, and Airan Berry, who have been imprisoned and charged with "terrorism, conspiracy, illicit trafficking of weapons of war and (criminal) association."

The others implicated in the case are Venezuelans.

Maduro said last week his government has evidence that US President Donald Trump “personally ordered” the military raid on his country.

He showed the US passports and other identification cards belonging to Berry and Denman, noting that they had been working with Jordan Goudreau, a military veteran who has already claimed responsibility for the attack.

Trump, however, denied his government had any role in the plot to kidnap the elected president of Venezuela