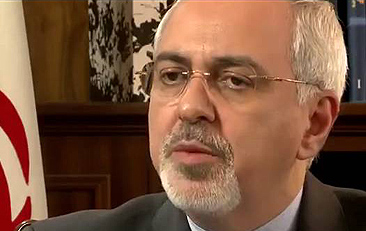 ‘I will commit to everything and anything that would provide credible assurances for the international community that Iran is not seeking nuclear weapons, because we are not,’ Zarif told NBC’s ‘Meet the Press’ from Vienna, where the sixth round of Iran and G5+1 talks are underway, according to IRNA.

Zarif rejected ‘calculations’ suggesting Iran would seek to develop nuclear weapons to guard itself against its neighbors.

‘We need to go out of our way in order to convince our neighbors that we want to live in peace and tranquility with them,’ Zarif told David Gregory of NBC.

Calling the principle of nuclear deterrence ‘simply mad,’ the foreign minister insisted that Pakistan was not considered stronger than Iran simply because it has nuclear weapons.

‘The fact that everybody in the international community believes that mutual assured destruction -- that is the way the United States, Russia and others, seek peace and security through having the possibility of destroying each other 100 times over is simply mad,’ he added.

‘Now you have proof that nuclear weapons or no amount of military power makes you safe. So we need to live in a different paradigm. And that’s what we are calling for.’