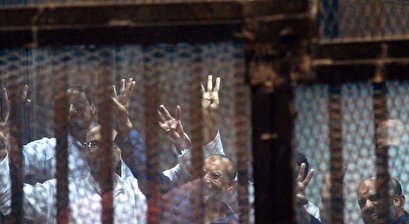 The New York-based rights group said in a statement on Thursday that it compiled the executions between October 3 and 13 from reports in pro-government newspapers.

According to the HRW, of the 49 killed, 15 were convicted of alleged involvement in political violence following the military overthrow in July 2013 of Egypt’s first democratically elected president, Mohamed Morsi.

Some of the executed were found guilty in three separate cases, including 10 prisoners accused of carrying out attacks in 2014 for the armed group known as Soldiers of Egypt.

Another three were executed for their alleged role in a 2013 attack on a police station in a suburb of the capital Cairo, and two others for a violent protest in Alexandria the same year.

According to the group, over a dozen of this month’s executions took place in Cairo’s notorious supermax facility following clashes last month inside the death row ward that left four policemen and four inmates dead.

At the time, authorities said the four prisoners, who had been sentenced to death in separate terrorism-related cases, were killed during an escape attempt.

However, the HRW statement cited an anonymous human rights lawyer who challenged the government’s account.

The lawyer said the four prisoners ambushed and fatally stabbed the guards during a routine inspection. Other inmates later saw security forces enter the cell and gunshots were heard.

Other prisoners put to death had been sentenced for a range of crimes, including murder and rape.